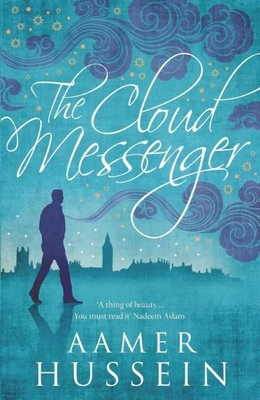 A shower of pleasures.--Julia O'Faolain

Like his parents, he too spent many hours sending cloud messages to other places, messages of longing for something that he knew existed otherwhere.

London, that distant rainy place his father lived in once, is where Mehran finds himself after leaving Karachi in his teens. And it is there that his adult life unfolds: he discovers the joys of poetry, faces the trials of love and work, and spends his dreaming hours sending cloud messages to other places, hoping, one day, to tell his own story.

A feeling of not quite belonging anywhere pursues Mehran as he travels to Italy, India, and Pakistan. But the relationships he forms--with wounded, passionate Marvi, volatile Marco, and the enigmatic Riccarda--and his power of recollection finally bring him some sense, however fleeting, of home.

Aamer Hussein was born in Karachi in 1955 and moved to London in his teens. He lectures at the University of Southampton and the Institute of English Studies and is a fellow of the Royal Society of Literature. His novella Another Gulmohar Tree was shortlisted for the Commonwealth Writers' Prize Europe and South Asia 2010.


Praise For The Cloud Messenger…

"A thing of beauty... You must read it" Nadeem Aslam

"It has a certain wistfulness that captures the sense of feeling at odds with the world." The Guardian

"Hussein is a master of the significant moment... There is magic in the everyday, suggests Hussein; in a phone call, or a letter, or even a cloud - and it is to those moments, however fleeting, that we should cling, even though all else is destroyed." The Telegraph

"The Cloud Messenger by Aamer Hussein is one of those rare books whose cover an exquisite work of art, design and typography is as stunning as the pages within... What drives the novel forward is neither plot nor characterization, but the skill of storytelling. This is a slow book, lacking urgency in dialogue and plot progression, and acutely invested in individual moments and peculiar details." Asian Review of Books

"The lush romanticism that characterizes the story refers to the heart-sickness of Persian poetry. It also touches a vein of German romanticism: obsessive longing for the entfernte Geliebte, the search for the Ur-language. This is a multicultural Bildungsroman, charting a culturally confused landscape, endlessly seeking to assimilate East and West. As the biography of a reader, the work bears fascinating comparison with Azar Nafisi's Reading Lolita in Tehran." The Independent

"Elegantly melancholy, yet sharp-eyed too. I was reminded simultaneously of the early 19th-century French and of poetic worlds I didn't know at all. A shower of pleasures" Julia O'Faolain

"The Cloud Messenger is imbued with a romanticism which stems as much from the European tradition as it does from classical Persian poetry ... A hauntingly grown-up novel of love and contingency, friendship and tragedy." Alison Fell

"By turns melancholy and humorous, The Cloud Messenger is an intense depiction of Mehran's love for these two women. Its approach is intellectual, its prose unabashedly literary; true to the promise of its prologues, it is a 'story that's rain coloured: rain-grey, rain-blue' ... Sophisticated, cosmopolitan and seductive, the novel engages mind and senses alike ... Marrying the grace of early twentieth-century European writing with an Islamic sensibility, Hussein decorates his text with quotations from Urdu, Sindhi, Farsi and Sufi poets." André Naffis-Sahely, Times Literary Supplement

"In a way, The Cloud Messenger is very post-modern, eschewing all notions of a "grand narrative" or a single "truth", as well as conventional novel structure. In another way, it is profoundly romantic. It is a story of longing - longing for lost friends and loved ones, for memories, for belonging, for things that may never have been. With great honesty and exquisite imagery, Hussein delves deep into human emotions, both overt and hidden. He not only tells a story; he forces the reader to reflect on his or her own life and relationships." Sally Bland, Jordan Times

Aamer Hussein was born in Karachi in 1955 and moved to London in his teens. He lectures at the University of Southampton and the Institute of English Studies, and is a Fellow of the Royal Society of Literature. His novella Another Gulmohar Tree was shortlisted for the Commonwealth Writers' Prize Europe and South Asia in 2010.
Loading...
or support indie stores by buying on