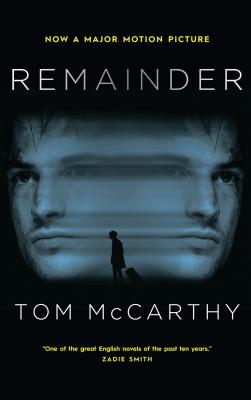 Traumatized by an accident which 'involved something falling from the sky' and leaves him eight and a half million pounds richer but hopelessly estranged from the world around him, Remainder's hero spends his time and money obsessively reconstructing and re-enacting vaguely remembered scenes and situations from his past: a large building with piano music in the distance, the familiar smells and sounds of liver frying and spluttering, lethargic cats lounging on roofs until they tumble off them... But when this fails to quench his thirst for authenticity, he starts re-enacting more and more violent events, as his repetition addiction spirals out of control.

A darkly comic meditation on memory, identity and history, Remainder is a parable for modern times.

“Remainder is an intelligent and absurd satire on consumer culture.” - The Times

“Its minatory brilliance calls for classic status” - The Independent

“There are echoes of Beckett, Flann O'Brien too, perhaps, but in the end McCarthy has a precision, a surreal logic and a sly wit that is all his own. It will be a long time before you come across a stranger book, or a truer one.” - Rupert Thomson, The Observer

“Remainder, with seamless prose, endlessly probes the surface of the "event", its infinite elements, angles, perspectives, how it comes about, how it can be brought about again, then lived and relived in Ballardian orbits and Beckettian vibrations . . . It will remain with you long after you have felt compelled to re-read it.” - Time Out

“Strangely gripping . . . Remainder should be read (and, of course, reread) for its intelligence and humour.” - The Times Literary Supplement

“This isn’t how we expect a novel to be, but it’s why it’s a very good novel indeed.” - London Review of Books

“McCarthy delivers his wacky tale, an enquiry into authenticity and experience, with persuasive logic and a nice line in absurdist humour.” - Literary Review

“Its minatory brilliance calls for classic status” - The Independent

“This is a refreshingly idiosyncratic, enjoyably intelligent read by a writer with ideas and talent” - The Guardian

Known in the art world for the reports, manifestos and media interventions he has made as General Secretary of the International Necronautical Society (INS), a semi-fictitious avant-garde network, Tom McCarthy is the author of four novels: Remainder, Men in Space, C and Satin Island. The last two were shortlisted for the Man Booker Prize. In 2013 he was awarded the inaugural Windham Campbell Prize for Fiction.
Loading...
or
Not Currently Available for Direct Purchase