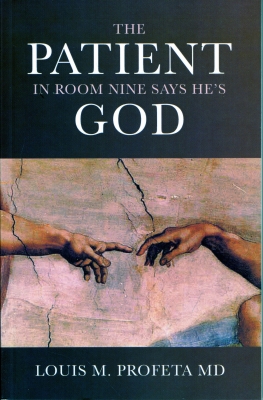 A young Jewish doctor prays to a coma patient's Blessed Mother on Christmas Eve, only to have the woman suddenly awakened; there is the voice that tells a too-busy ER doctor to stop a patient walking out, discovering an embolus that would have killed him. The late-night passing of a beloved aunt summons a childhood bully who shows up minutes later, after twenty-five years, to be forgiven and to heal a broken doctor. This ER doctor finds God's opposite in: a battered child's bruises covered over by make-up, a dying patient whose son finally shows up at the end to reclaim the man's high-top sneakers, the rich or celebrity patients loaded with prescription drugs from doctor friends who end up addicted. But, his real outrage is directed at our cavalier treatment of the elderly, If you put a G-tube in your 80-year-old mother with Alzheimer's because she's no longer eating, you will probably have a fast track to hell.

Dr. Louis M. Profeta is a practicing Emergency Physician residing in Indianapolis, Indiana. He is a medical educator and frequent guest on radio and television. He is the recipient of numerous honors and awards for contributions to public safety including the Red Cross Certificate of Recognition for his medical assistance at a department store bombing. Dr. Profeta is a consultant for the U.S. Men's Olympic Gymnastics Team. Dr. Profeta has authored numerous papers, lectures and abstracts on Emergency Medicine and is a popular and noted blogger on Sermo, the largest physician networking site in North America. His articles on LinkedIn on ebola, phones, and pushy parenting have been going viral.
Loading...
or
Not Currently Available for Direct Purchase