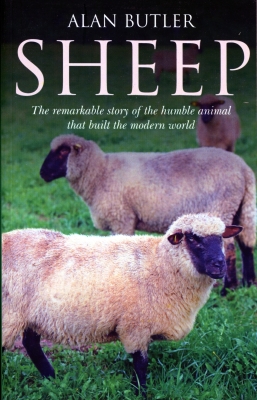 What was the most important step in civilization? Alan Butler's answer is that it was when we began capturing wild sheep, domesticating and breeding them. Sheep were the mainstay of ancient cultures, by far the most important of the domesticated animals. Able to survive almost anywhere, over-wintering successfully, they provided not just milk, meat and skin, but warm clothing. This is why so many of the earliest gods and their myths are sheep related, from the Egyptian Ra (ram) to the later Christian Lamb of God. But sheep have not only sustained us for thousands of years. Sheep farming also underpinned the growth of European nation states, international trade and modern economies. In effect sheep built the modern world. The demands of the woollen textile industry both drove and financed the Industrial Revolution. The British Empire was founded on wool. The space needed for sheep drove millions off the land, many of whom took them to Australasia and the Americas. With over a billion sheep in the world today the humanity-sheep relationship represents the most successful example of mammalian symbiosis on the planet. The story of the sheep is the story of humanity, a surprisingly exciting and gripping tale that deserves to be told. Spanning a vast period of time, it includes some of the most famous names that have been left to us by history, and many that deserve to better recognised.

Alan Butler has had a life-long interest in sheep. He writes stage and radio plays, and has published Civilization One, The Templar Continuum, The Virgin and the Pentacle and The Goddess, the Grail and the Lodge. He lives in the East Riding, England.
Loading...
or
Not Currently Available for Direct Purchase