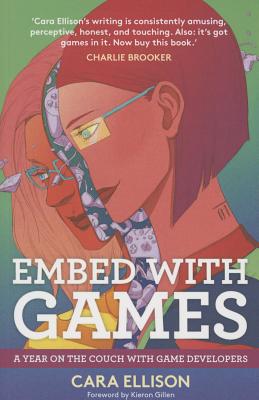 A Year on the Couch with Game Developers

In January of 2014 Cara wasn't quite making rent but her cultural criticism on games for places like The Guardian seemed pretty popular. On a whim she pledged to her Twitter followers that she would do gonzo journalism and travel each month to stay with game creators she found across the world, if they put a bit of money towards it. Cara put a page up on Patreon and said if it got to $1,000 that would be enough for her first flight. She thought it would never get there … Within an hour this ‘cyberpunk hair-dyed Attenborough’ had kicked herself out of her home and sent herself hurtling across a year of four continents, living on gamemakers’ couches, writing about their cities and creations. Six hundred readers funded her round-the-world trip, from London to Tokyo, Kuala Lumpur to Melbourne. This is a collected work of all the essays Cara wrote along the way, a map of independent game creation as she found it.

Praise For Embed with Games: A Year on the Couch with Game Developers…

Cara Ellison is a Scottish writer, game critic and video game narrative designer. She has written for the Guardian, VICE, Kotaku, PC Gamer, Paste Magazine and the New Statesman, wrote the best-named column in the world, S.EXE, at Rock Paper Shotgun, and had a regular opinion column at Eurogamer. Currently she designs the narratives for video games.
Loading...
or
Not Currently Available for Direct Purchase