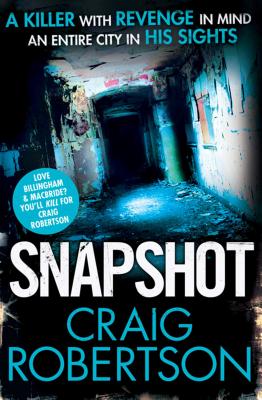 A blistering thriller from acclaimed author Craig Robertson about a vigilante killer with revenge on his mind—and an entire city in his sights—for fans of Stuart MacBride.

A series of shootings by a lone sniper leaves Glasgow terrorized and the media in afrenzy. Who is behind the executions of some of the most notorious criminals in the city? As the body count rises—including those of police officers and innocent members of the public—the authorities realize they have a vigilante on their hands.

Police photographer Tony Winter has seen more than his fair share of dead bodies. So when he notices a detail in one of his negatives that the forensic team has missed—something that seems to link the sniper’s victims with the case of a badly beaten schoolboy—he launches an investigation of his own.

Meanwhile, DS Rachel Narey is reeling after being transferred from the sniper case onto a seemingly routine inquiry into the death of a prostitute. But she can’t help but notice how every lead draws her back to the sniper.

As Winter and Narey delve deeper, their quest for the truth will lead them both down increasingly dark and dangerous paths…

Craig Robertson is a Sunday Times bestselling author, and his debut novel, Random, was shortlisted for the CWA New Blood Dagger. His most recent novel, Murderabilia was longlisted for the UK’s top crime fiction awards, including Theakston’s Old Peculier Crime Novel of the Year 2017 and the McIlvanney Prize 2017. During his twenty-year career with a Scottish Sunday newspaper, Craig Robertson interviewed three recent prime ministers and reported on major stories including 9/11, the Dunblane school massacre, the Omagh car bombing, and the disappearance of Madeleine McCann.
Loading...
or
Not Currently Available for Direct Purchase