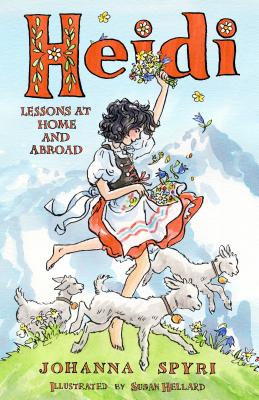 Her Early Lessons and Travels

Orphaned at an early age, Heidi has been brought up by her mother's sister Dete in Switzerland. Having been offered a job in Frankfurt, however, her aunt is forced to entrust her young charge into the care of her grandfather, the reclusive Alp-Uncle who lives in the mountains without any interaction with the villagers beneath. The curmudgeonly old man is initially reluctant to accept the new arrangement, but his grand-daughter's warmth, cleverness and exuberance soon win him over, while Heidi learns to love her new surroundings and makes a new friend, Peter the goatherd. But as Heidi gets settled in her new life, little does she suspect that a major upheaval is just around the corner.

A timeless classic of Swiss literature that has inspired many adaptations and has captured the imaginations of children the world over, Heidi's Early Lessons and Travels is here presented in a brand-new, unabridged translation by James Bowman, with charming illustrations by Susan Hellard.

Johanna Spyri (1827-1901) is the creator of Heidi, one of the world's most beloved children's books. She lived in Switzerland.
or
Not Currently Available for Direct Purchase