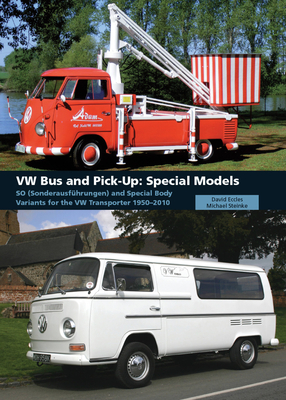 Special Models: SO (Sonderausfhrungen) and Special Body Variants for the VW Transporter 1950-2010

Since its introduction in 1950 the Volkswagen Transporter has become legendary for its versality and adaptability to many commercial uses. Known originally as Sonderausfhrungen, abbreviated to SO, these Special Models were usually converted by specialists, companies and coachbuilders approved by VW. Using archive, promotional materials and period and contemporary photographs, this book traces the development and variety of these SO and other Special Body conversions from 1950 - 2010, across the five generations from T1 to T5.

David Eccles has been around VW campers since he and his wife, Cee, journeyed to India and back in 1976, travelling and living in a 1967 Canterbury Pitt. They have owned their current VW Camper, a 1966 walk-through Devon Caravette since 1978. After twenty years of family holidays, the camper is fully restored and is used for travelling to VW shows and events. David is well known for his passion for the VW Bus and is currently the editor of Volkswagen Camper and Commercial magazine. He is a resident of Leicestershire, England.An English teacher for thirty-four years, David Eccles has been passionate about the VW Bus since taking one to India and back in 1976. Since 2000 he has been the Editor of VW Camper and Commercial magazine and he has also authored four previous VW Bus specification and lifestyle books. Michael Steinke has owned twenty-eight different VW Buses of all generations and types of conversions, and driven more than 1.2 million kilometres in them. Interested in the history of the VW Transporter, he began to build up the archives of Classic Volkswagen Transporters in his home town Frankfurt, Germany.
or
Not Currently Available for Direct Purchase
Copyright © 2020 American Booksellers Association