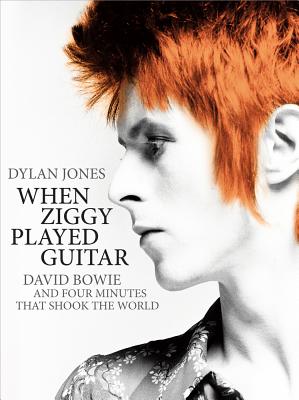 David Bowie and Four Minutes that Shook the World

June 7, 1972. 7.30pm. David Bowie performs "Starman" on Top of the Pops. This is the story of a moment in music history that changed a generation.
When David Bowie, the uber-freak with the mismatched pupils, the low-tech space face from the planet Sparkle, made his third appearance on Top of the Pops, that appearance was the one that properly resonated with its audience, the one that would go on to cause a seismic shift in the zeitgeist. This is the performance that turned Bowie into a star, embedding his Ziggy Stardust persona into the public's consciousness. With a tall, flame-orange cockade quiff (stolen from a Kansai Yamamoto model on the cover of Honey), lavishly applied make-up, white nail polish, and wearing a multi-colored jumpsuit that looked as though it were made from fluorescent fish skin (chosen by Ziggy coshaper the designer Freddie Buretti), and carrying a brand spanking new, blue acoustic guitar, a bone-thin Bowie appeared not so much as a pop singer, but rather as some sort of benevolent alien, a concept helped along by the provocative appearance of his guitarist, the chicken-headed Mick Ronson, with both of them unapologetically sporting knee-length patent leather wrestler's boots (Bowie's were red). Suddenly Bowie had the world at his nail-polished fingertips, and in no time at all he would be the biggest star in the world.

Dylan Jones is the multi-award winning editor of GQ magazine. He has been an editor at i-D magazine, the Face, Arena, the Observer and the Sunday Times. He writes for the Mail on Sunday, is a Vice President of the Hay Festival and a board member of the Norman Mailer Foundation.
or
Not Currently Available for Direct Purchase
Copyright © 2020 American Booksellers Association