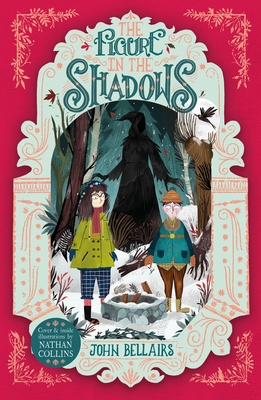 Settled into his new life, Lewis seems content living with his magical Uncle Jonathan and neighbor Mrs Zimmermann. He even has a new best friend, Rose Rita, who loves to play sports, build Roman ship models and play with magic—all the things Lewis loves to do too! After discovering Grandpa Barnavelt's 1859 lucky coin, Lewis is certain that it is magical, so he puts it to the test—he recites one of Mrs Zimmermann's spells to awaken its magic. Only Lewis hasn't awakened a good sort of magic. As he wears the coin around his neck, sinister things start to happen. Strange letters addressed to Lewis arrive at midnight, a dark shadowy figure begins to follow him in town and something seems to be inside his body controlling his actions. As the figure in the shadows appears more and more, Lewis is possessed by its power, unable to free himself. Has Lewis awakened a force beyond his control? And can Uncle Jonathan, Mrs. Zimmermann and Rose Rita make it in time to rescue Lewis?

John Bellairs (1938-1991) was an award-winning American author of many gothic mystery novels for children and young adults, including The House with a Clock in Its Walls, which received both the New York Times Outstanding Book of the Year Award and the American Library Association Children's Books of International Interest Award; The Lamp from the Warlock's Tomb, which won the Edgar Award; and The Specter from the Magician's Museum, which won the New York Public Library "Best Books for the Teen Age" Award.
Loading...
or support indie stores by buying on