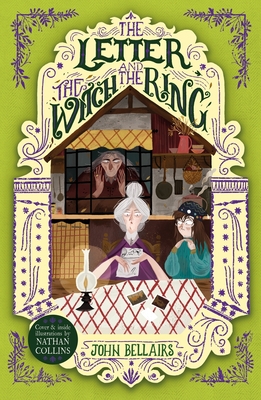 The Letter, the Witch and the Ring (The House with a Clock in Its Walls #3)

Rose Rita wishes she could go to camp like her best friend, Lewis. She's sure that boys get to have all the fun, but instead she must stay at home and get ready to attend Junior High, where she will have to do "girly" activities—something she hates! That is until Mrs. Zimmermann offers her an adventure of her own—a trip to cousin Oley's farm. Mrs. Zimmermann's cousin Oley has left her his farm, as well as a ring that he thinks is magic. But when Mrs. Zimmermann and Rose Rita arrive at the deserted farm, the ring has mysteriously vanished. Strange things start to happen around them—Mrs. Zimmermann becomes ill, Rose Rita keeps on seeing scary images and Mrs. Zimmermann goes missing. What power does this magical ring have? Will the person who took the ring use it to do evil? And will Rose Rita be able to rescue Mrs. Zimmermann from whatever evil force has taken her?

John Bellairs (1938-1991) was an award-winning American author of many gothic mystery novels for children and young adults, including The House with a Clock in Its Walls, which received both the New York Times Outstanding Book of the Year Award and the American Library Association Children's Books of International Interest Award; The Lamp from the Warlock's Tomb, which won the Edgar Award; and The Specter from the Magician's Museum, which won the New York Public Library "Best Books for the Teen Age" Award.
Loading...
or support indie stores by buying on