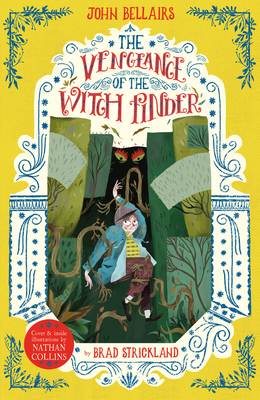 Lewis and Uncle Jonathan have traveled to England to visit family at the Barnavelt Manor, much to Lewis's delight—he hasn't visited family outside of America before! Lewis becomes friends with the housekeeper's son, Bertie, and as the two boys explore the manor's garden maze, Lewis accidentally unleashes demonic forces that summon the ghost of an evil wizard adamant on destroying his entire family.

"[Lewis's] endearing character, along with the novel's underlying current of melancholy, makes this much more than run-of-the-mill supernatural entertainment. Chock-full of deliciously spooky details and narrated in a voice that is as cozy as it is ornery, this tale is utterly spellbinding." —Publishers Weekly

"The atmosphere and supernatural effects here are particularly eerie, even for Bellairs. . . . Satisfyingly hair-raising." —Kirkus Reviews

John Bellairs (1938-1991) was an award-winning American author of many gothic mystery novels for children and young adults, including The House with a Clock in Its Walls, which received both the New York Times Outstanding Book of the Year Award. Brad Strickland has written more than 75 books, including the Lewis Barnavelt series after John Bellairs's death in 1991. He is a professor of English at the University of North Carolina Gainesville.
Loading...
or support indie stores by buying on
(This book is on backorder)