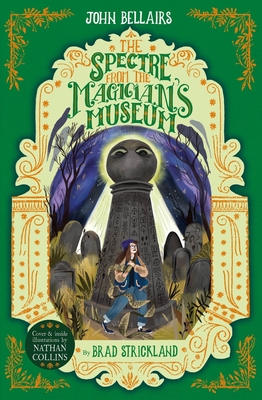 Lewis and Rose Rita have to participate in a talent show whether they like it or not. When they come up with the idea of doing a fake magic show, they decide to borrow some books on stage magic from a friend who works at a museum. After Rose Rita cuts her finger on an enchanted Egyptian scroll, she awakens the corpse of the scroll's previous owner, Belle Frisson, who captures Rose Rita and wants to use her body to live forever. Lewis must work together with his Uncle Jonathan and neighbor Mrs. Zimmermann to rescue Rose Rita from the tomb in which she's imprisoned.

John Bellairs (1938-1991) was an award-winning American author of many gothic mystery novels for children and young adults, including The House with a Clock in Its Walls, which received the New York Times Outstanding Book of the Year Award. Brad Strickland has written more than 75 books, including the Lewis Barnavelt series after John Bellairs's death in 1991. He is a professor of English at the University of North Carolina Gainesville.
Loading...
or support indie stores by buying on