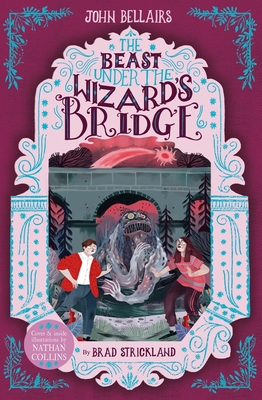 When Lewis and his best friend Rose Rita set out to explore old Wilder Creek Bridge and the deserted farm nearby, they discover shocking secrets: the destruction of the bridge threatens to release a horrifying monster, the legacy of a long-dead evil magician. Even Lewis's Uncle Jonathan and the magical Mrs Zimmermann may not be able to vanquish this ferocious creature! For fans of Goosebumps.

"Strickland combines the conventions of mystery writing (an old will, a secret passage) with those of science fiction (a piece of a meteorite that glows with swirling colors), folklore (a soul hiding outside the body), fantasy (a magic spell), and horror (a hideous monster rising from the creek). Faithful readers, who have followed Lewis, Rose Rita, Uncle Jonathan, and Mrs. Zimmerman since their debut in John Bellairs' The House with a Clock in Its Walls (1973), will find this mystery entirely up to standard with its familiar characters, twisting plot, and happy ending. Another fast-paced story in a long-running series." --Booklist

Brad Strickland has written more than 85 published books, including entries in the Lewis Barnavelt and Johnny Dixon series, following the death of the original series creator, John Bellairs. He is a Professor Emeritus of English and lives in Georgia with his wife, Barbara. John Bellairs (1938-1991) was an award-winning American author of many gothic mystery novels for children and young adults, including The House with a Clock in Its Walls, which received both the New York Times Outstanding Book of the Year Award and the American Library Association Children's Books of International Interest Award; The Lamp from the Warlock's Tomb, which won the Edgar Award; and The Specter from the Magician's Museum, which won the New York Public Library "Best Books for the Teen Age" Award.
Loading...
or support indie stores by buying on