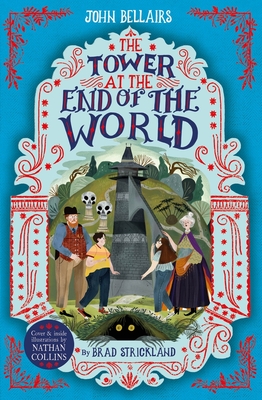 When Lewis, his uncle Jonathan, and their friends Rose Rita and Mrs Zimmermann take a trip to a small town near Lake Superior, they expect a pleasant vacation. Instead, they find themselves facing the ghastly Ishmael Izard, son of the fiendish creator of the Doomsday clock that was once hidden in the walls of Uncle Jonathan's house. Ishmael is a cruel and heartless sorcerer, and he is determined to wreak vengeance on the entire world. Will Lewis and his friends be strong enough to defeat him, or will their fate be decided by their most formidable foe yet? For fans of Goosebumps.

John Bellairs (1938-1991) was an award-winning American author of many gothic mystery novels for children and young adults, including The House with a Clock in Its Walls, which received both the New York Times Outstanding Book of the Year Award and the American Library Association Children's Books of International Interest Award;The Lamp from the Warlock's Tomb, which won the Edgar Award; and The Specter from the Magician's Museum, which won the New York Public Library "Best Books for the Teen Age" Award. Brad Strickland has written more than 85 books, including entries in the Lewis Barnavelt and Johnny Dixon series, following the death of the original series creator, John Bellairs. He is a Professor Emeritus of English and lives in Georgia.
Loading...
or support indie stores by buying on