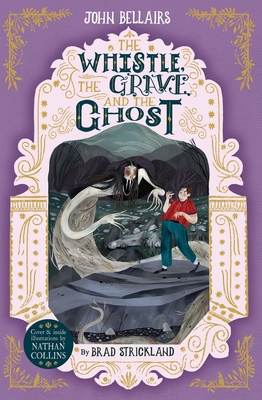 The Whistle, the Grave and the Ghost (The House with a Clock in Its Walls #10) (Paperback)

A camping trip with his Scout troop leads Lewis straight to a strange, old grave and a mysterious, magical silver whistle. When Lewis discovers that this whistle has the power to stop the boys in his Scout troop bullying him, he is overcome with relief - finally he can enjoy being part of the Scouts. What Lewis doesn't know is that the whistle also has a more sinister power: it summons a powerful vampire!

Lewis is drawn into battle with this ancient evil, and with the help of Rose Rita, Uncle Jonathan and Mrs Zimmermann, he must save his own life and the lives of those he loves.

Is Lewis strong enough to destroy the potent spirit?

For fans of Goosebumps.

John Bellairs (1938-1991) was an award-winning American author of many gothic mystery novels for children and young adults, including The House with a Clock in Its Walls, which received both the New York Times Outstanding Book of the Year Award and the American Library Association Children's Books of International Interest Award, The Lamp from the Warlock's Tomb, which won the Edgar Award and The Specter from the Magician's Museum, which won the New York Public Library 'Best Books for the Teen Age' Award. Brad Strickland has written more than eighty-five published books, including entries in the Lewis Barnavelt and Johnny Dixon series, following the death of the original series creator, John Bellairs. He is a Professor Emeritus of English and lives in Georgia with his wife, Barbara.

Praise For The Whistle, the Grave and the Ghost (The House with a Clock in Its Walls #10)…

"Lewis is an appealingly imperfect character. . . . Strickland excels at heart-in-your-throat suspense that he maintains until the final paragraphs. A stand-alone book as well as a solid addition to the series." -Booklist
or
Not Currently Available for Direct Purchase
Copyright © 2020 American Booksellers Association