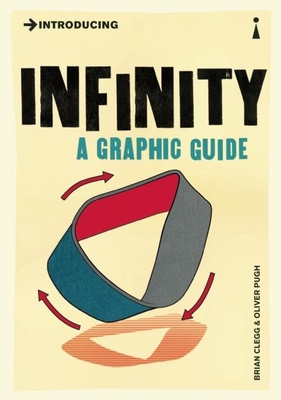 A brand new graphic guide from Brian Clegg, author of the best-selling Inflight Science, Introducing Infinity will teach you all you need to know about this big idea, from mathematicians driven mad by transfinite numbers to the ancient Greeks who drowned the man that discovered an endless number.

Brian is the author of the recent bestselling Icon Books title Inflight Science and has written a number of popular science books, including Ecologic, The God Effect , on the most remarkable phenomenon of the quantum world and Before the Big Bang . Other titles include A Brief History of Infinity . Along with appearances at the Royal Institution in London he has spoken at venues from Oxford and Cambridge Universities to Cheltenham Festival of Science, has contributed to radio and TV programmes, and is a popular speaker at schools. Brian is also editor of the successful www.popularscience.co.uk book review site and is a Fellow of the Royal Society of Arts. Brian has Masters degrees from Cambridge University in Natural Sciences and from Lancaster University in Operational Research, a discipline originally developed during the Second World War to apply the power of mathematics to warfare. It has since been widely applied to problem solving and decision making in business. From Lancaster, he joined British Airways, where he ran teams including Emerging Technologies, amongst the most eccentric but talented staff in the company, who researched technologies from fingerprint recognition to electronic cash. This emphasis on innovation led to training with Dr. Edward de Bono, and in 1994 he left BA to set up his own creativity consultancy, running courses on the development of new ideas and products, and the creative solution of business problems. Clients include the BBC, the Met Office, British Airways, GlaxoSmithKline, Sony, The Treasury, Royal Bank of Scotland and many other blue-chips. Brian has also written regular columns, features and reviews for numerous publications, including Nature, The Guardian, PC Week, Computer Weekly, Personal Computer World, Innovative Leader, Professional Manager, BBC History, Good Housekeeping and House Beautiful. His books have been translated into many languages, including German, Spanish, Portuguese, Chinese, Japanese, Polish, Turkish, Norwegian, Thai and even Indonesian.
Loading...
or support indie stores by buying on