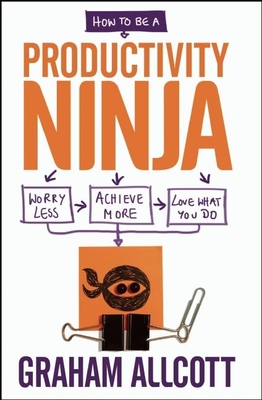 How to Be a Productivity Ninja (Paperback)

Worry Less, Achieve More and Love What You Do

"All the tips and techniques you need to stay calm, get through your tasks, make the most of your time and stop procrastinating. It's fun, easy to follow and practical--and may just be the kick up the bottom you need "--Closer

When it comes to overflowing inboxes, ever-expanding to-do lists, and endless meetings, traditional time-management techniques--like those in bestselling books by David Allen or Dominic Wolff-- simply don't cut it in the age of information overload

Thankfully there's a better way. Graham Allcott, founder of one of the United Kingdom's most prominent productivity workshop companies, Think Productive (thinkproductive.com), presents How to be a Productivity Ninja, his brilliant--and originally self-published--guide to cutting through the procrastination, getting more done, and enjoying your work and your life more as a result.

Using techniques including Ruthlessness, Mindfulness, Zen-like Calm, and Stealth and Camouflage, you will get your inbox down to zero, maximize your attention span, and learn work smarter, not harder.

Graham Allcott is a productivity trainer, social entrepreneur, and founder of Think Productive, which runs public productivity workshops throughout the world and has run in-house workshops for staff at organizations including the Bill & Melinda Gates Foundation, American Express, JP Morgan, Amazon, eBay, PayPal, and GlaxoSmithKline.

Graham Allcott: Graham Allcott is a productivity trainer, social entrepreneur and founder of Think Productive. Think Productive run public workshops throughout the world and also run in-house workshops for staff at a diverse range of organizations, including the eBay, Heineken & GlaxoSmithKline. Prior to founding Think Productive, Graham's career has been primarily focused on social action. He ran community volunteering projects for the University of Birmingham before becoming Chief Executive of the charity Student Volunteering England, and has since worked on a number of social enterprise and charity projects.
or
Not Currently Available for Direct Purchase
Copyright © 2020 American Booksellers Association