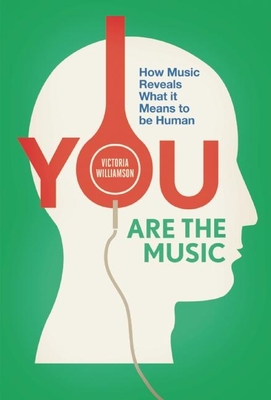 You Are the Music (Paperback)

How Music Reveals What It Means to Be Human

"You are the music / While the music lasts."--T.S. Eliot, "The Four Quartets"

In this brilliant new exploration of the place of music in all our lives, music psychologist Victoria Williamson examines the many ways in which music affects us, from our first in utero experiences of sound through to adult life, and the part it plays in shaping who we are as individuals.

Victoria Williamson is a lecturer and researcher in music psychology who holds academic posts in the United Kingdom and Switzerland. Her research has been presented across international media including CNN, MSNBC, and CBC (Canada).

Victoria Williamson is a lecturer and researcher in music psychology who holds academic posts in the UK and Switzerland. An expert in the impact of music on human behaviour, she has worked in both university and private industry research and hosts the popular educational blog musicpsychology.co.uk. Her personal musical life began aged six with classical guitar, an instrument that she still adores and has taught to both children and adults. A popular public speaker, she has presented her work at numerous forums including TED, the Latitude Festival, the British Science Festival and NPR. Her writing has appeared in NME and her research has been presented across national and international media including BBC, ITV, Channel 4 and Sky (UK), CNN and MSNBC (USA), CBC (Canada), Radio New Zealand National, and 2SER and the Big Issue (Australia).
or
Not Currently Available for Direct Purchase
Copyright © 2020 American Booksellers Association