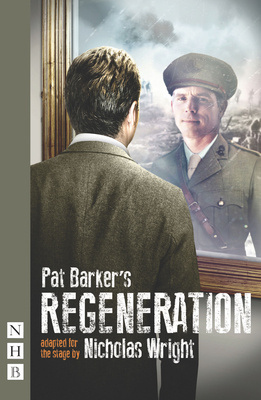 A powerful anthem for the youth of World War One that offers a compassionate look at war and its devastating effects. Adapted from Pat Barker's Booker Prize-nominated novel. Craiglockhart War Hospital, Scotland 1917. Poet and soldier Siegfried Sassoon has been institutionalised in an attempt to undermine his public disapproval of the war. His Army Psychiatrist, Dr William Rivers, has been tasked with returning shell-shocked officers to the trenches, yet under Sassoon's influence, has become tormented by the morality of what is being done in the name of medicine. Produced to mark the centenary of the outbreak of WWI, Regeneration opened at the Royal & Derngate, Northampton, in August 2014, before embarking on a national tour co-produced by Touring Consortium. Nicholas Wright's plays include the acclaimed National Theatre adaptation of Philip Pullman's His Dark Materials, Mrs Klein, Travelling Light and Vincent In Brixton, which won the Olivier Award for Best New Play in 2003. His writing about the theatre includes Changing Stages: A View of British Theatre in the Twentieth Century, co-written with Richard Eyre. ' a] superb stage version of a work of genius... gutting and unmissable' - Independent 'shocking, tender and grimly funny... gently breaks your heart' - The Times 'deeply moving... a] humane and enriching play' - Guardian

Pat Barker is an award-winning English writer and novelist most famous for her Regeneration Trilogy, named by the Observer as one of the ten best historical novels of the 20th century. Nicholas Wright's previous plays include Travelling Light, The Last of the Duchess and the acclaimed National Theatre adaptation of Philip Pullman's His Dark Materials, Mrs Klein, Rattigan's Nijinsky, The Reporter, Cressida and Vincent In Brixton, which won the Olivier Award for Best New Play in 2003. All of his plays are published by Nick Hern Books.
Loading...
or
Not Currently Available for Direct Purchase