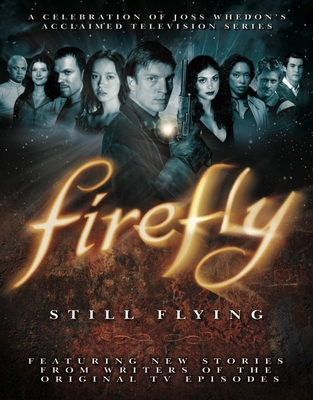 “We have done the impossible, and that makes us mighty.”

Since its short-lived appearance on TV in 2002, Joss Whedon’s Firefly has indeed done the impossible. It’s sold over a half a million copies on DVD, spawned the hit movie Serenity, and most remarkably, inspired a loyal fan following — the Browncoats — whose numbers are still growing to this day.

Still Flying is a brand new celebration of all aspects of the show, featuring a wealth of rare and previously unpublished images — including storyboards, production design art and candid behind the scenes photos — memories from the cast and crew, a tribute to the Browncoats, and, as a special bonus:

FUN WITH DICK AND JAYNE written and drawn by Ben Edlund

WHAT HOLDS US DOWN by Jane Espenson

TAKE THE SKY by Jose Molina

Joss Whedon is the creator and guiding light behind Buffy the Vampire Slayer, Angel, Firefly and Dollhouse. He also wrote and directed the movie Serenity.
Loading...
or
Not Currently Available for Direct Purchase