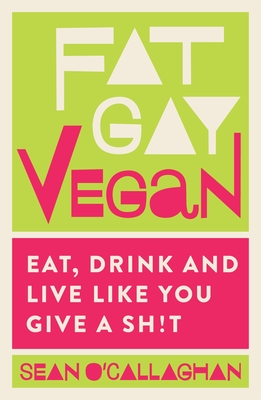 Eat, Drink and Live Like You Give a Sh*t

Follow the journey from A to Vegan of one of the world’s biggest(!) vegan bloggers and learn what the V-word really means – and why it matters.

Fat Gay Vegan is exactly what he says in the name – he’s fat, he’s gay and he’s vegan. But for a word that's grown so popular, what does being vegan actually mean?
Veganism has grown hugely in the last decade, but is surrounded by questions of ethics, of community, of celebrity food fads and spurious health claims. For the last seven years, Fat Gay Vegan has been a voice that cuts through the fuss and the fads. Now, he brings together his story with those of others to answer to the questions both vegans and non-vegans alike might have:

• Why should I be vegan in the first place?
• Does not being vegan mean I'm a bad person?
• What should my friends and family do... and are they bad people?
• Do I need to be a gym bunny to be worthy of veganism? (answer: no)
• Can I still eat junk food if I’m vegan? (answer: definitely yes!)

In Sean’s own words: When a wave of realisation swamps you and you come to learn how incredibly simple and sensible choosing veganism is, you’ll have me sitting up there in your head like a friendly, fat uncle whispering, “I knew you could do it.” The day will arrive when you proclaim, “Hey, if that fat gay guy can do it, so can I!”

Packed with personal stories and non-preachy advice, this is a compassionate, no-nonsense guide to veganism from one of the community's biggest celebrities.

Praise For Fat Gay Vegan: Eat, Drink and Live Like You Give a Sh*t…

'[Sean] is a natural storyteller, and the book effortlessly, often hilariously, weaves together his own journey to vegan activism'
—Vegetarian Living

Sean O'Callaghan is the freelance journalist and events organizer behind Fat Gay Vegan. He is based in the UK and Mexico, and has been the face of the award-winning Fat Gay Vegan blog since 2010. He has built up a huge following blogging about vegan dining across the UK and beyond from an ethical, not a "health trend" standpoint. He promotes vegan food pop-ups, cafés, restaurants and ventures across the UK, has written for the LA Times (2016) and has a regular column in Vegan Life magazine.
Loading...
or
Not Currently Available for Direct Purchase