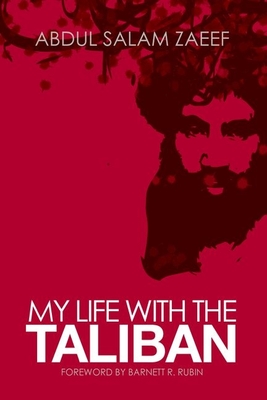 My Life with the Taliban (Paperback)

This is the autobiography of Abdul Salam Zaeef, a senior former member of the Taliban. His memoirs, translated from Pashto, are more than just a personal account of his extraordinary life. My Life with the Taliban offers a counter-narrative to the standard accounts of Afghanistan since 1979. Zaeef describes growing up in rural poverty in Kandahar province. Both of his parents died at an early age, and the Russian invasion of 1979 forced him to flee to Pakistan. He started fighting the jihad in 1983, during which time he was associated with many major figures in the anti-Soviet resistance, including the current Taliban head Mullah Mohammad Omar. After the war Zaeef returned to a quiet life in a small village in Kandahar, but chaos soon overwhelmed Afghanistan as factional fighting erupted after the Russians pulled out. Disgusted by the lawlessness that ensued, Zaeef was one among the former mujahidin who were closely involved in the discussions that led to the emergence of the Taliban, in 1994. Zaeef then details his Taliban career as civil servant and minister who negotiated with foreign oil companies as well as with Afghanistan's own resistance leader, Ahmed Shah Massoud. Zaeef was ambassador to Pakistan at the time of the 9/11 attacks, and his account discusses the strange "phoney war" period before the US-led intervention toppled the Taliban. In early 2002 Zaeef was handed over to American forces in Pakistan, notwithstanding his diplomatic status, and spent four and a half years in prison (including several years in Guantanamo) before being released without having been tried or charged with any offence. My Life with the Taliban offers a personal and privileged insight into the rural Pashtun village communities that are the Taliban's bedrock. It helps to explain what drives men like Zaeef to take up arms against the foreigners who are foolish enough to invade his homeland.

Born in southern Afghanistan in 1968, Abdul Salam Zaeef played a role in many of the historical events of his lifetime, from his role as mujahed in the 1980s war against the Soviets, to administrative positions within the Taliban movement, to imprisonment in Guantanamo, to a role of public advocacy and criticism of the US-backed Karzai government following his release in 2005. He lives in Kabul.
or support indie stores by buying on
(This book is on backorder)
Copyright © 2020 American Booksellers Association