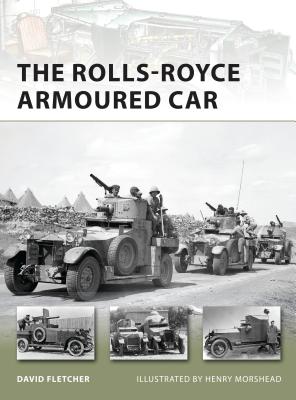 The first Rolls-Royce armoured car was a privately owned vehicle fitted with a machine-gun and a limited amount of armour plate at a dockyard in France. It was used by a squadron of the Royal Naval Air Service in Flanders in 1914. Backed by First Lord of the Admiralty, Winston Churchill more and better versions followed until, by 1915 there were about 100 of them which were then handed over to the Army. "They searched the world for War" as Sir Albert Stern said of them and before long there were Rolls-Royce armoured cars operating as far apart as German South West Africa, the Western Desert, Gallipoli, all over the Middle East and the north west frontier of India.

All of them used the classic 40/50hp Silver Ghost chassis. They were fast, silent and reliable but above all strong. "A Rolls in the desert is above rubies" said Lawrence of Arabia and the Duke of Westminster would have agreed with him following his famous raid to rescue the kidnapped crew of the steamship HMS Tara. At least one car accompanied the adventurous MP Oliver Locker-Lampson on his adventures in Russia.

After the war, unable to find a better model the War Office simply copied the original Admiralty design with minor improvements. If that was not enough the Royal Air Force also acquired some to support their operations in the Middle East. A new design with a larger body and dome shaped turret also appeared for service in India. They also served in Ireland and even, briefly in Shanghai.

The 11th Hussars still had Rolls-Royces in Egypt when the war against Italy began and the youngest of these was over fifteen years old when they went into action, but after that their numbers dwindled as newer vehicles came along. But then history repeated itself. Britain was threatened with invasion and a new army of veterans was raised to assist with defence. Some battalions built home made armoured cars, on private chassis and at least three of these were based on Rolls-Royces.

David Fletcher was born in 1942. He has written a number of books and articles on military subjects and is currently the historian at the Tank Museum, Bovington, UK. He has spent over 40 years studying the development of British armoured vehicles during the two World Wars.

“...a fascinating history of a vehicle used from 1914 to the 1950s that served in conflicts around the world, and will interest auto history as well as military history buffs.” —James A. Cox, The Midwest Book Review (August 2012)