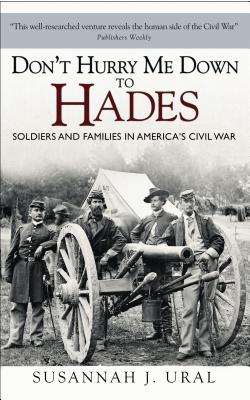 Don’t Hurry Me Down to Hades

Don't Hurry Me Down to Hades is the story of families enduring the whirlwind of the Civil War, told through the words of famous and ordinary citizens and ranging from the battlefield to the home front, from presidential councils to frontier revivals. The book reveals how Americans on both sides of the Mason and Dixon line withstood four years of brutal, unrelenting conflict. Of the hundreds of thousands of books published on the American Civil War, this is one of the few to approach the nation's defining conflict from this powerful perspective.

Grounded in rare family letters and diaries, Don't Hurry Me Down to Hades captures Americans' wide-ranging reactions to the war and their astonishing perseverance. Some of the accounts are entirely unknown to readers, while better-known events are told from unusual perspectives. Abraham Lincoln's assassination, for example, is shared from the viewpoint of Major Henry Rathbone and his fiancée (and stepsister) Clara Harris, while Lewis Powell's attempt on Secretary of State William Seward's life is seen through the terrified eyes Fanny Seward, who was seated next to her father when Powell burst into the room. Madison and Lizzie Bowler help readers understand how the war brought a Minnesota couple together in marriage and then nearly drove them apart when Madison insisted that his first duty was to his nation while Lizzie believed it was to her and their newborn daughter.  A thousand miles to the south, two Texas families also suffered through their soldiers' absence and tried to explain to their young children why father had “gone to war” with “Santaclause.” And to the north in Kentucky, a runaway slave won freedom for himself and his family by joining the Union Army only to face prejudice as brutal and destructive as the life he'd left behind.

Readers are carried alongside these families, sharing their dreams that the fighting might end this year and suffering with them when the Reaper comes calling. Through these and other stories, Don't Hurry Me Down to Hades invites readers to set aside previous assumptions to learn about the divisions and range of opinions on both sides from ordinary and famous men and women, black and white, slave and free. Esteemed Civil War historian Susannah J. Ural brings fresh insight into the war by delving into historical archives and private family papers to peal back the passage of time. Her consummate narrative weaves together a textured, powerful portrait of a nation at war with itself.


Praise For Don’t Hurry Me Down to Hades: The Civil War in the Words of Those Who Lived It (General Military)…

“The author highlights the social and cultural history of the American Civil War by linking new, rare accounts of families and ordinatry citizens who witnessed the war with a compelling contextual analysis of the period.” —Military History Quarterly

“Taking her sources as her co-authors, Susannah Ural ferries us deep inside the maelstrom of the Civil War to its very heart, where we realize anew that war is not a sequence of battles but a vast mosaic of heart-rending family crises. Beautifully written, exhaustively researched, and highly recommended.” —Professor Stephen Berry, Gregory Professor of the Civil War Era, University of Georgia

“Susannah J. Ural's Don't Hurry Me Down to Hades masterfully recounts the Civil War, relying on the voices of the people who experienced it.   Her narrative captures its vastness and violence, moving North to South, battlefield to homefront, but also poignant moments of intimacy and loss… The result is a fresh and engaging account of the conflict.” —Lesley J. Gordon, Editor, Civil War History

“Susannah J. Ural reminds us that the Civil War was fought by real people with families and deep emotional connections... This is the Civil War as lived experience, vibrantly and movingly written.” —Professor Anne Sarah Rubin, author of A Shattered Nation

“In this dramatic, expertly conceived and executed work, editor Ural deftly weaves the words and lives of the participants into a narrative of rare depth and insight. What she achieves is to go beyond the simple daily routines of the historical actors, as the powerful letters and journals she includes give readers a sense of the internal struggles that flowed through every facet of the war and society itself. And if the participants' words and the editor's remarkable prose and historical knowledge were not enough, the work also contains a most impressive and generous set of high-resolution plates. For Civil War enthusiasts and historians of the era, this is a must read. Summing Up: Essential.” —T. Maxwell-Long, California State University, San Bernardino, CHOICE Magazine

Susannah J. Ural, PhD., is an Associate Professor of History and Senior Fellow in the Center for the Study of War & Society at the University of Southern Mississippi. She teaches a variety of courses relating to nineteenth-century America, the field of war and society, and the U.S. Civil War era. Her first book, The Harp and the Eagle: Irish-American Volunteers and the Union Army, 1861-1865 (NYU Press, 2006) examined the motivations and experiences of Irish Catholic soldiers and their families. Her second work, the edited collection Civil War Citizens: Race, Ethnicity, and Identity in America's Bloodiest Conflict, (NYU Press, 2010) chronicles larger ethnic experiences in the 1860s. She is currently finishing her narrative history of John Bell Hood's Texas Brigade, entitled Hood's Boys, which highlights the experiences of the men and the families of this unit, the communities from which they came, and how they represent the larger Confederate experience. Susannah Ural and her family live in Petal, Mississippi.
Loading...
or
Not Currently Available for Direct Purchase