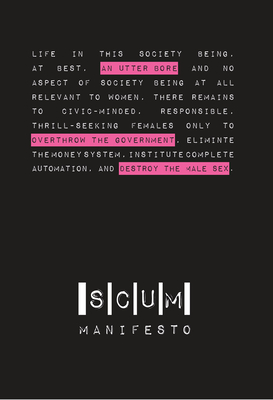 First circulated on the streets of Greenwich Village in 1967, the SCUM Manifesto is a searing indictment of patriarchal culture in all its forms. Shifting fluidly between the worlds of satire and straightforward critique, this classic is a call to action--a radical feminist vision for a different world. This is an update of the essential AK Press edition, with a new foreword. "To see the SCUM Manifesto's humor, to let it crack you up page after page, is not to read it as a joke. It's not. The truth of the world as seen though Valerie's eyes is patently absurd, a cosmic joke. Humor such as this is a muscle, a weapon... It was the truth, and the truth is so absurd it's painful." --Michelle Tea "Unhampered by propriety, niceness, discretion, public opinion, 'morals', the respect of assholes, always funky, dirty, low-down SCUM gets around... You've got to go through a lot of sex to get to anti-sex, and SCUM's been through it all, and they're now ready for a new show; they want to crawl out from under the dock, move, take off, sink out." --Valerie Solanas Valerie Solanas was a radical feminist playwright and social propagandist who was arrested in 1968 after her attempted assassination of Andy Warhol. Deemed a paranoid schizophrenic by the state, Solanas was immortalized in the 1996 film I Shot Andy Warhol.

Valerie Solanas: Valerie Solanas was a radical feminist playwright and social propagandist best known as the author of the SCUM Manifesto, which she self-published and sold on the streets of New York. In 1968, she was arrested after an assassination attempt on the life Andy Warhol, and imprisoned for three years. Deemed a paranoid schizophrenic by the state, once out of jail, Solanas stalked Warhol for several more years, before eventually leaving New York. She died alone and in relative obscurity in 1988 in San Francisco, leaving behind a sheaf of typewritten pages that her mother burned after her death. Solanas was immortalized by actress Lili Taylor in the 1996 film I Shot Andy Warhol.
Loading...
or support indie stores by buying on