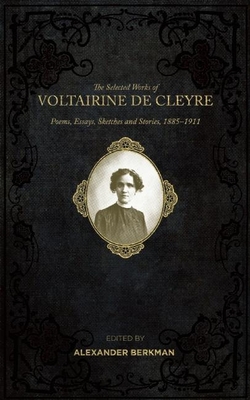 "The most gifted and brilliant anarchist woman America ever produced...a forceful personality, a brilliant mind, a fervent idealist, an unflinching fighter, a devoted and loyal comrade." --Emma Goldman "What can you say about a forgotten genius, a feminist foremother, Yiddish-speaking French immigrant's child, Free Love champion and Gothic poet, defender of lost causes par excellence? Don't be fooled by the patina of dust--in certain abandoned mines, there are underground fires that are still burning." --Jesse Cohn, author of Underground Passages: Anarchist Resistance Culture, 1848-2011 Voltairine de Cleyre was undeniably one of the most important anarchist thinkers in the US or anywhere else. Historian Paul Avrich considered her "a greater literary talent than any other American anarchist" and, moreover, a woman whose "whole life was a revolt against this system of male domination which, like every form of tyranny and exploitation, ran contrary to her anarchistic spirit." Plagued by poverty and poor health--and a nearly successful assassination attempt--she maintained an intense schedule of writing, speaking, and organizing for much of her life. Widely admired by her contemporaries, including many political enemies, she was one of the foremost advocates of an inclusive "anarchism without adjectives," while at the same time advancing an uncompromising and principled direct-action approach to political and economic struggle. Soon after her premature death, her comrades gathered a selection of her work, edited by Alexander Berkman, introduced by Hippolyte Havel, and published by Emma Goldman's Mother Earth Publishing Association. This facsimile edition changes nothing from the original 1914 version. Voltairine de Cleyre's essays, poems, and stories ring just as true and clear today as they did a century ago. Voltairine de Cleyre, while little known today, was a crucial link in radical international milieus in the late nineteenth and early twentieth centuries. One of the most prolific writers among US anarchists, she died at the young age of forty-five in 1912. Alexander Berkman, author of What is Anarchism?, was a leading writer and organizer in the US anarchist movement. Hippolyte Havel was an editor of numerous publications and author of dozens of articles. He was a major influence on many artists and radicals of his day.

Voltairine de Cleyre: Called A brief comet in the anarchist firmament, blazing out quickly and soon forgotten by all but a small circle of comrades whose love and devotion persisted long after her death, by Paul Avrich, Voltairine de Cleyre was a little-known, but crucial link in the early American anarchist milieu of the 20th century. A poet and essayist, de Cleyre was plagued all her life by poverty, pain, and ill health, and died prematurely at the age of 45 in 1912.Alexander Berkman: Alexander Berkman was a leading writer and participant in the 20th century Anarchist movement. The young, idealistic Berkman practiced propaganda by deed attempting to assassinate Henry Clay Frick during the Homestead Steel Strike of 1892. While imprisoned, he wrote the classic tale of prison life Prison Memoirs of and Anarchist. After his release, Berkman edited Emma Goldman's Mother Earth and his own paper The Blast!. Deported from New York City to his native Russia in 1919, were he saw first hand the failure of the Bolshevik revolution and dedicated himself to writing the classic primer on Anarchism, What is Anarchism?.Hippolyte Havel: Hippolyte Havel was a Czech anarchist who lived most of his life in New York City. Editor of numerous publications, including Emma Goldman's Mother Earth, he wrote dozens of articles and was a major influence on many artists and radicals of his day.
Loading...
or support indie stores by buying on