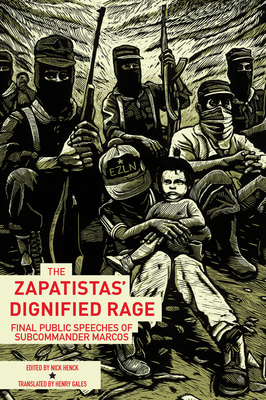 For over two decades, Mexico's Zapatista indigenous movement has stood as a beacon of hope for activists around the world working against the havoc that capitalism is wreaking upon the earth. Subcommander Marcos was their military leader and spokesperson, a poetic advocate who was, for many, almost indistinguishable from the movement he championed. On May 25, 2014, in the town of La Realidad, deep in the Zapatistas' heartland, Subcommander Marcos delivered a speech before thousands of supporters in which he declared that he would henceforth "cease to exist," a change that made way for the movement's indigenous members to assume a more prominent role.

Readers will find that speech in The Zapatistas' Dignified Rage, along with fourteen others he gave between the end of the "Other Campaign" in 2007 and his farewell announcement in 2014. While he made fewer public appearances during this period, he simultaneously increased the depth of his analysis. Collected here in English translation for the first time, these talks include some of his most explicit, detailed, and inspiring criticisms of capitalism, political parties, vanguards, electoral democracy, gender and racial discrimination, disingenuous solidarity, and much more.

Nick Henck: Nick Henck is Associate Professor at Keio University (Tokyo) and the author of the only English-language biography of Mexican guerrilla spokesperson Subcommander Marcos, Subcommander Marcos: The Man and the Mask, Duke Univ. Press, 2007.Subcomandante Insurgente Marcos: Subcomandante Marcos was the leading spokesperson for the Zapatista Army of National Liberation (EZLN) until 2014 when he declared himself to no longer to exist. He now goes by Subcomandante Galeano.Henry Gales: Henry Gales is a freelance translator living in Mexico City.
Loading...
or support indie stores by buying on