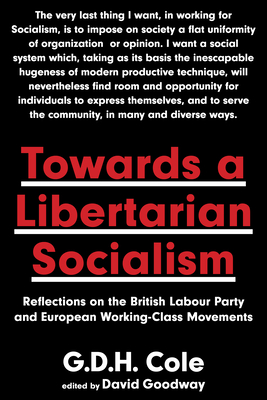 Towards a Libertarian Socialism

Reflections on the British Labour Party and European Working-Class Movements

A collection of essays from a revered member of the British Labour Party. What distinguished Cole was his distance from traditional marxist and bureaucratic labour approaches. Neither a Communist nor a Social Democrat (nowadays referred to as a Democratic Socialist a la Bernie Sanders) Cole desired a socialism that centered freedom for workers--an end to capitalist exploitation, workers' management of production, and an expanding democracy in all realms of social life.

G.D.H. Cole (1889-1959) was one of the twentieth century's outstanding socialist writers and thinkers. From the 1920s until his death he was the pre-eminent Labour intellectual, surpassing Harold Laski and R.H. Tawney in the proliferation of his publications and general omnipresence. David Goodway taught sociology, history and Victorian studies to mainly adult students from 1969 until 2005. For thirty years he has written principally on anarchism and libertarian socialism, publishing collections of the writings of Alex Comfort, Herbert Read, 'Maurice Brinton', and Nicolas Walter and of the correspondence between John Cowper Powys and Emma Goldman; Talking Anarchy with Colin Ward; as well as Anarchist Seeds beneath the Snow: Left-Libertarian Thought and British Writers from William Morris to Colin Ward. He has recently published The Real History of Chartism and an edition of George Julian Harney's late journalism, The Chartists Were Right.
Loading...
or support indie stores by buying on