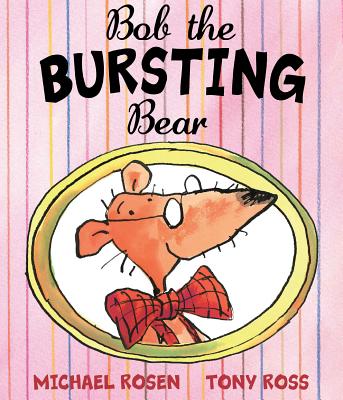 Leaving Toy School for his new home, Bob the Bear thinks he knows all there is to being loved and cuddled. But in the end it is a surprising and unusual talent that helps him most of all.


Praise For Bob the Bursting Bear…

"Michael Rosen can be depended upon for his oddball magic. . . . Tony Ross's quaintly ebullient style complements a tale determined to go out with a bang and no whimpering." —Guardian

Michael Rosen is a children's novelist and poet who was appointed the UK Children's Laureate for 2007–2009. He is the author of more than 140 books, including Bear's Day Out, Michael Rosen's Sad Book, Poems for the Very Young, Three Feet Small, and We're Going on a Bear Hunt. Tony Ross is the author and illustrator of The Boy Who Cried Wolf, Centipede's 100 Shoes, I Don't Want to Go to Bed!, Stone Soup, Three Little Kittens and Other Favorite Nursery Rhymes, and Wash Your Hands!, among others. He has received numerous awards, including the German Children's Book Prize and the silver medal in the Smarties Prize, and has been short-listed for the Kate Greenaway Medal.
Loading...
or
Not Currently Available for Direct Purchase