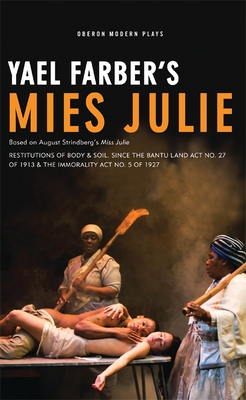 South African born internationally acclaimed director and playwright, Ya l Farber, sets her explosive new adaptation of Strindberg's Miss Julie in the remote, bleak beauty of the Eastern Cape Karoo. Transposed to a post-apartheid kitchen - a single night, both brutal and tender, unfolds between a black farm-labourer, the daughter of his master and the woman who has raised them both. The visceral struggles of contemporary South Africa are laid bare, as John and Mies Julie spiral in a deadly battle over power, sexuality, mothers and memory. Haunting and violent, intimate and epic, the characters struggle to address issues of reprisal and the reality of what can and cannot ever be recovered.

'Miss Julie has never raged quite so fiercely as she does in this searing and fearless new version… savage and unbound. Brilliant.' – The Guardian

'The smash hit of the Fringe.' – The Telegraph


'gets you watching as if your life depended on it, and leaves you heart-wrecked'' – Sunday Times

Yael Farber is an award-winning writer and director who was born and raised in Johannesburg, South Africa. She is at the forefront of a movement of artists keen to share their stories of the horrors of Apartheid with the world.
Loading...
or
Not Currently Available for Direct Purchase