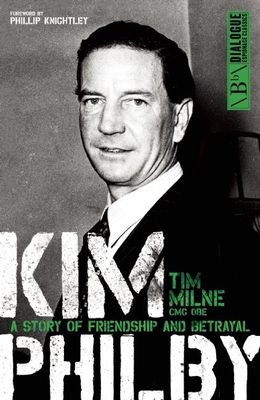 A Story of Friendship and Betrayal (Dialogue Espionage Classics)

Elegant and rich in detail, Kim Philby] provides intriguing glimpses of the man who would become the twentieth century's most notorious British spy and traitor.--Mail on Sunday

Kim Philby is recognized as the Cold War's most infamous traitor, a Soviet spy at the heart of British intelligence. Tim Milne was Philby's closest and oldest friend. His treachery was a huge blow to Milne and, after he retired, Milne wrote this highly revealing description of Philby's time in the secret service.

Tim Milne retired from MI6 in October 1968 and never spoke publicly of his friendship with Kim Philby. He died in 2010.

Tim Milne: Tim Milne was the nephew of Winnie the Pooh writer AA Milne, retired from SIS in October 1968 and never spoke publicly of his friendship with Kim Philby. He later wrote a full and frank account of his association. He died in 2010. Phillip Knightley: Phillip Knightley is a journalist, critic, and non-fiction author, visiting Professor of Journalism at the University of Lincoln, England, and media commentator on the intelligence services and propaganda. His books include the seminal The First Casualty and Philby, KGB Master Spy.
Loading...
or support indie stores by buying on