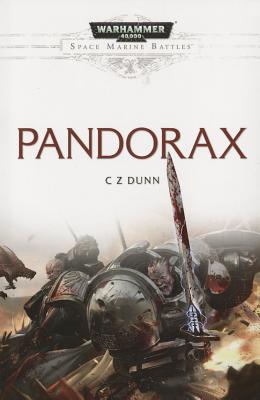 The latest novel in the Space Marine Battles series In the Pandorax System, on the death world of Pythos, an ancient secret that has laid buried for millennia has been unearthed.... Ignorant of this terror, troopers of the Catachan 183rd, stranded on Pythos and under the command of Colonel 'Death' Strike, find themselves under attack by the forces of Chaos. Daemons in their thousands flock the sky, and none other than Warmaster Abaddon leads the attack. With the Death Guard and Black Legion arrayed against them, the Catachans appear to be doomed, until salvation arrives in the form of the entire Dark Angels Chapter, led by Master Azrael and a host of heroes. But what is the so-called 'Damnation Cache'? What secrets does it harbour and why has it also attracted the attention of the daemon-hunting Grey Knights?

Domiciled in the East Midlands, C Z Dunn is the author of the Apocalypse novel Pandorax, the Dark Angels novella Dark Vengeance and the audio dramas Trials of Azrael, Ascension of Balthasar and Malediction, as well as several short stories. Having spent many years in the publishing industry, with a strong leaning towards genre fiction, he is an expert in e-publication, audio production and zombies
Loading...
or
Not Currently Available for Direct Purchase