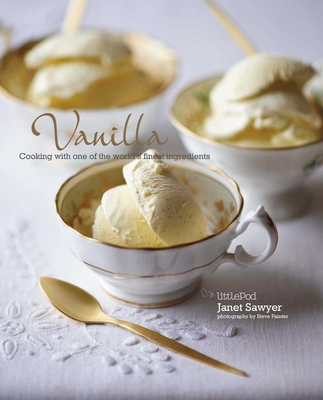 Brought to Europe by Spanish explorer Hernán Cortés in the 16th century, vanilla became something of an obsession for Queen Elizabeth I. Later known as ‘black gold’, for vanilla’s rarity was more precious than gold, it has in recent years lost its luster and become synonymous with all things bland. This book seeks to re-establish vanilla’s lofty perch as one of the most exciting and cherished ingredients on the planet. This book will show you how to use this wondrous spice in a fantastic array of cakes, such as Elderflower and Almond Cake as well as delicious desserts like Persian Rice Pudding. Why not sit back and enjoy a rich, velvety Vanilla Hot Chocolate from the drinks section? You can also inject a little bit of magic into teatime treats with the heavenly Vanilla Scones. If you’re looking for something a little different, why not try one of the sensational savoury dishes to delight and surprise your dinner guests? These dishes showcase the extraordinary versatility of vanilla—truly the king of spices.

Janet Sawyer is the founder of Little Pod, a vanilla company based in Devon, England. The company launched in 2010 as a one-woman operation and has been growing ever since. The company has won several awards, including Editor’s Choice in gourmet magazine Delicious and a Great Taste Gold award for its vanilla beer. They supply many high quality food establishments, including Pâtisserie Valerie. This is Janet’s first book.
Loading...
or
Not Currently Available for Direct Purchase