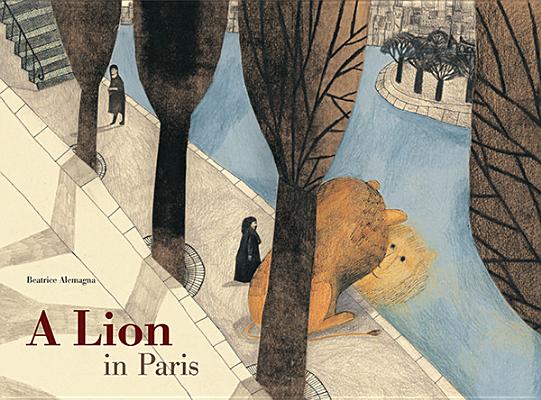 A Lion in Paris

A Lion in Paris is widely regarded as the most accomplished book by multi-award-winning children’s author/illustrator Beatrice Alemagna. It tells the story of a lion who, bored by his rural life in the savanna, seeks excitement and opportunity in the City of Light. Upon arriving in Paris, the lion is disappointed to find that despite his size, people barely pay attention to him, not even when he lets out a ferocious roar on the busy underground Métro.
Revealing the sights and sounds of Paris from Montmartre to the Eiffel Tower, this beautifully illustrated book successfully conveys the experience of being a stranger in a new city and the process of understanding one’s own identity.

Praise for A Lion in Paris
STARRED REVIEW
"This oversized book about a bored young lion who visits Paris to find “a job, love and a future” is worth every bit of paper and ink. The lion atop the Eiffel Tower, mane blowing in the wind, captures the essence of this artful, whimsical delight."
—Kirkus Reviews, starred review

"By the time he decides to settle in the City of Lights, readers will be thoroughly charmed by both the lion and his creator."
—Publishers Weekly

"Ms. Alemagna's illustrations are made up of drawings, colored cutouts and bits of photography—an increasingly popular approach known as mixed-media collage—and she is playful with perspective. The effect is both mesmerizing and warming as we follow the great beast around the City of Light."
—The Wall Street Journal

Beatrice Alemagna is the author and illustrator of over 30 books for children, including What is a Child? and A Lion in Paris. Her books have been translated into twelve languages, and four were nominated for the Astrid Lindgren Memorial Award, among many other awards. In 2017, her picture book On A Magical Do-Nothing Day was named a New York Times Best Illustrated Book of the Year and was recognized with a Gold Medal from the Society of Illustrators. She is from Bologna, Italy and lives in Paris, France.
Loading...
or support indie stores by buying on
(This book is on backorder)