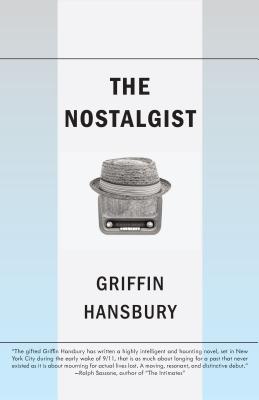 Stoop-shouldered and balding beneath a porkpie hat, Jonah Soloway is an old man before his time. Estranged from his astrophysicist father and effectively orphaned when an SUV took his mother’s life, Jonah longs to make a human connection—even if it means lying to get it. When he calls the phone number on Rose Oliveri’s 9/11 missing poster and reaches her mother, Vivian, one lie gives birth to another and another, and before Jonah knows it, the truth becomes indiscernible even to him.

Stalked by Rose’s ghost and desperate to keep the Oliveris from uncovering his lie, Jonah finds himself adrift in a city he no longer recognizes and more alone than ever.

Both a poetic journey into the heart of post–9/11 New York and a darkly comic commentary on how our culture copes with loss, The Nostalgist is a striking debut novel from a masterful new author.

Griffin Hansbury holds a master’s degree from the Creative Writing Program of New York University. He is the author of Day for Night, an acclaimed collection of poems, and has received numerous awards for his writing, including two fellowships from the New York Foundation of the Arts. His writing has appeared online in Mr. Beller’s Neighborhood and Dan Kennedy’s Really Small Talk. He lives in New York City.