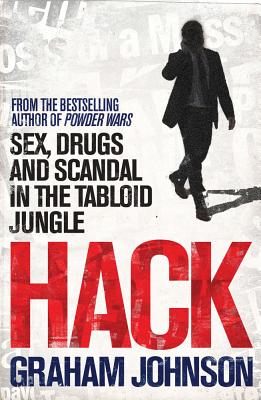 Sex, Drugs, and Scandal from Inside the Tabloid Jungle

Graham Johnson was a fresh-faced journalist with an ambition to break the big news stories and make his name as a star reporter when an offer came in to work at a leading tabloid… he couldn't say no. Instantly, he found himself drawn into a world of sleaze, spin and corruption - where bending the law was justifiable in the hunt for the big-selling story and bending the truth was the norm.

Against his better judgement, Graham found his niche in this new world and, what's more, he found that he was good at it. In his time at first the News of the Worldthen the Sunday Mirror, he made a name for himself as a man who could deliver the story, no matter what - a kind of tabloid terrorist who rifled through celebrity's rubbish bins, staked out politicians' hotel rooms, and paid-up page three girls to seduce Premiership footballers, all in the name of selling newspapers.

Hackis a compelling and intoxicating story of one man's time in the tabloid jungle - a world that in its heady mix of sex, drugs and casual immorality is reminiscent of the City - and how he ultimately saved himself.

Graham Johnson is an investigative journalist and author of the highly acclaimed true crime titles "Druglord," and "Powder Wars."
Loading...
or support indie stores by buying on
(This book is on backorder)