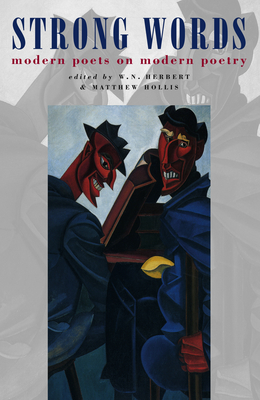 Poetry has never been so rigorous and diverse, nor has its audience been so numerous and engaged. Strong words? Not if the poets are right. As Ezra Pound wrote: 'You would think anyone wanting to know about poetry would go to someone who knew something about it.' That's exactly what Bloodaxe has done with this judicious and comprehensive selection of British, Irish and American manifestos by some of modern poetry's finest practitioners. Opening the 20th century account with Ezra Pound, W.B. Yeats and T.S. Eliot, the book moves through key later figures including W.H. Auden, Ted Hughes, Stevie Smith and Dylan Thomas. America is richly represented too, from Robert Frost and William Carlos Williams to the influential New England poets Robert Lowell, Elizabeth Bishop and Sylvia Plath. Strong Words then brings the issues fully up to date with over 30 specially commissioned statements from contemporary writers including Seamus Heaney, Andrew Motion, Simon Armitage, Selima Hill, Paul Muldoon and Douglas Dunn, amounting to a new overview of the poetry being written at the start of the 21st century. For poets and readers, for critics, teachers and students of creative writing and contemporary poetry, this is essential reading. As well as representing many of the most important poets of the last hundred years, Strong Words also charts many different stances and movements, from Modernism to Postmodernism, from Futurism to the future theories of poetry. This landmark book champions the continuing dialogue of these voices, past and present, exploring the strongest form that words can take: the poem.

W.N. [Bill] Herbert is a highly versatile poet who writes both in English and Scots. Born in Dundee, he established his reputation with two English/Scots collections from Bloodaxe, Forked Tongue (1994) and Cabaret McGonagall (1996). These were followed by The Laurelude (1998), The Big Bumper Book of Troy (2002), Bad Shaman Blues (2006), Omnesia (2013) and The Wreck of the Fathership (2020). He has also published a critical study, To Circumjack MacDiarmid (OUP, 1992) drawn from his PhD research. His practical guide Writing Poetry was published by Routledge in 2010. He co-edited Strong Words: modern poets on modern poetry (Bloodaxe Books, 2000) with Matthew Hollis, and Jade Ladder: Contemporary Chinese Poetry (Bloodaxe Books, 2012) with Yang Lian. Bill Herbert is Professor of Poetry and Creative Writing at Newcastle University and lives in a lighthouse overlooking the River Tyne at North Shields. He was Dundee's inaugural Makar from 2013 to 2018. Twice shortlisted for the T.S. Eliot Prize, his collections have also been shortlisted for the Forward Prize, McVities Prize, Saltire Awards and Saltire Society Scottish Book of the Year Award. Four are Poetry Book Society Recommendations. In 2014 he was awarded a Cholmondeley Prize for his poetry, and an honorary doctorate from Dundee University. In 2015 he became a Fellow of the Royal Society of Literature. Matthew Hollis was born in 1971 in Norwich, and now lives in London. He won an Eric Gregory Award in 1999. He is co-editor of 101 Poems Against War (Faber, 2003) and Strong Words: Modern Poets on Modern Poetry (Bloodaxe Books, 2000), and editor of the Selected Poems of Edward Thomas (Faber, 2011). He is Poetry Editor at Faber & Faber. After its shortlisting for the Forward Prize for Best First Collection, his first full-length collection Ground Water (Bloodaxe Books, 2004) was shortlisted for the Guardian First Book Award (the first time for a poetry book) and for the Whitbread Poetry Award. Ground Water was also a Poetry Book Society Recommendation. His biography, Now All Roads Lead to France: The Last Years of Edward Thomas (Faber, 2011), won the Costa Biography Award, the H.W. Fisher Biography Award and a Royal Society of Literature Jerwood Award for Non-Fiction, and was BBC Radio 4 Book of the Week and Sunday Times Biography of the Year. In 2016 he published two limited letterpress and hand-made pamphlets, Stones (Incline Press) and East (Clutag Press).
Loading...
or support indie stores by buying on