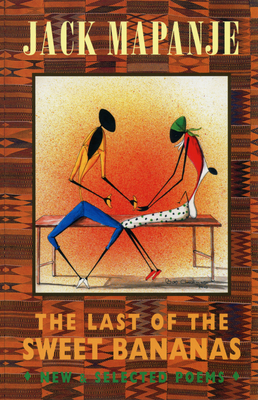 The Last of the Sweet Bananas

Because he was a radical poet, Jack Mapanje was imprisoned without trial or charge by the dictator Hastings Banda of Malawi for nearly four years. The themes of his poetry range from the search for a sense of dignity and integrity under a repressive regime, incarceration, release from prison, exile and return to Africa, and reconciliation with torturers, to the writer in Africa and the continuing African liberation struggle in a hostile world. While often deadly serious, Mapanje's poems are lifted by the generosity of spirit and irrepressible humour which helped sustain him through his prison ordeal.

Jack Mapanje is a poet, linguist, editor and human rights activist. He received the 1988 Rotterdam Poetry International Award for his first book of poems, Of Chameleons and Gods (1981) and the USA's Fonlon-Nichols Award for his contribution to poetry and human rights. He was head of the Department of English at the University of Malawi where the Malawi authorities arrested him in 1987 after his first book of poems had been banned, and he was released in 1991 after spending three years, seven months and sixteen days in prison, following an international outcry against his incarceration. He has since published five poetry books, The Chattering Wagtails of Mikuyu Prison (1993) from Heinemann, and Skipping Without Ropes (1998), The Last of the Sweet Bananas: New & Selected Poems (2004), Beasts of Nalunga (2007) and Greetings from Grandpa (2016) from Bloodaxe, as well as his prison memoir And Crocodiles Are Hungry at Night (Ayebia Clarke Publishing, 2011); he co-edited three anthologies, Oral Poetry from Africa (1983), Summer Fires: New Poetry of Africa (1983) and The African Writers' Handbook (1999); and edited the acclaimed Gathering Seaweed: African Prison Writing (2002). Beasts of Nalunga was shortlisted for the Forward Prize for Best Collection in 2007. Mapanje has held residences in the Netherlands, the Republic of Ireland and throughout Britain, including two years with the Wordsworth Trust at Dove Cottage in Cumbria. He lives in exile in York with his family, and is a visiting professor in the faculty of art at York St John University. He was awarded an honorary doctorate by the University of Bedfordshire in 2015.
Loading...
or support indie stores by buying on