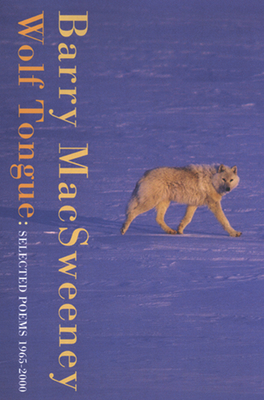 Barry MacSweeney's last book, The Book of Demons, recorded his fierce fight against alcoholism as well as the great love of those who helped save his life - though only for three more years. When he died in 2000, he had just assembled a retrospective of his work. Wolf Tongue is his own selection, with the addition of the two late books which many regard as his finest work, Pearl and The Book of Demons. Most of his poetry was out-of-print, and much had never been widely published. The title is his. The cover picture, he hunted down himself. Wolf Tongue is how he wanted to be known and remembered.

Barry MacSweeney was born in 1948 in Newcastle. After leaving school at 16, he worked as a journalist, mainly in Newcastle, Kent, Bradford and South Shields. He published numerous collections, including an earlier Selected Poems in The Tempers of Hazard, published and destroyed by Paladin in 1993.The Book of Demons (Bloodaxe Books, 1997), was a Poetry Book Society Recommendation. He won a Paul Hamlyn Award in 1997. He died in 2000. Two posthumous books appeared after his death, both in 2003, Wolf Tongue: Selected Poems 1965-2000 from Bloodaxe Books, and Horses in Boiling Blood: MacSweeney, Apollinaire: a collaboration, a celebration, from Equipage, followed by a further volume, Desire Lines: Unselected Poems 1966-2000, edited by Luke Roberts, from Shearsman in 2018.
Loading...
or support indie stores by buying on