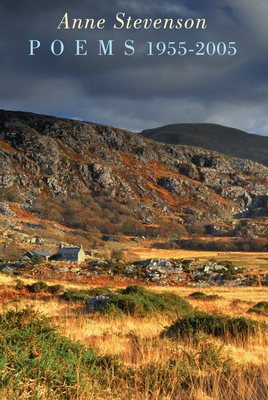 Anne Stevenson (1933-2020) was a major American and British poet. Born in Cambridge of American parents, she grew up in the States but has lived in Britain for most of her adult life. Rooted in close observation of the world and acute psychological insight, her poems continually question how we see and think about the world. They are incisive as well as entertaining, marrying critical rigour with personal feeling, and a sharp wit with an original brand of serious humour. Poems 1955-2005 is a remaking of Anne Stevenson's earlier Collected Poems (Oxford University Press), drawing on over a dozen previous collections as well as new poems, with this book's new thematic arrangements emphasising the craft, coherence and architecture of her life's work. It was expanded to include poems from her first two Bloodaxe collections, Granny Scarecrow (2000) and A Report from the Border (2003).

Anne Stevenson (1933-2020) was born in Cambridge, England, of American parents, and grew up in New England and Michigan. She studied music, European literature and history at the University of Michigan, returning later to read English and publishing the first critical study of Elizabeth Bishop. After several transatlantic switches, she settled in Britain in 1964, living in Cambridge, Scotland, Oxford, the Welsh Borders, and latterly in North Wales and Durham. She held many literary fellowships, and was the inaugural winner of Britain's biggest literary prize, the Northern Rock Foundation Writer's Award, in 2002. In 2007 she was awarded three major prizes in the USA: the $200,000 Lannan Lifetime Achievement Award for Poetry by the Lannan Foundation of Santa Fe, a Neglected Masters Award from the Poetry Foundation of Chicago and The Aiken Taylor Award in Modern American Poetry from The Sewanee Review in Tennessee. In 2008, The Library of America published Anne Stevenson: Selected Poems, edited by Andrew Motion, in conjunction with the Neglected Masters Award. This series is exclusively devoted to the greatest figures in American literature. Following two collections in the US in 1965 and 1969, she published her renowned family history sequence Correspondences, along with Travelling Behind Glass: Selected Poems 1963-1973, with Oxford University Press in 1974. After seven more books with OUP, she moved her publishing to Bloodaxe when OUP shut down its poetry list in 1999. In 2000 Bloodaxe reissued her OUP Collected Poems 1955-1995 at the same time as a new collection, Granny Scarecrow. These were followed by A Report from the Border (2003) and a new expanded retrospective, Poems 1955-2005 (2005), and then by three later collections, Stone Milk (2007), Astonishment (2012) and Completing the Circle (2020). As well as her numerous collections of poetry, Anne Stevenson published a biography of Sylvia Plath (1989), a book of essays, Between the Iceberg and the Ship (1998), and two critical studies of Elizabeth Bishop's work, most recently Five Looks at Elizabeth Bishop (Bloodaxe Books, 2006). In 2016 she gave the Newcastle/Bloodaxe Poetry Lectures, published by Bloodaxe in 2017 as About Poems and how poems are not about.
Loading...
or support indie stores by buying on