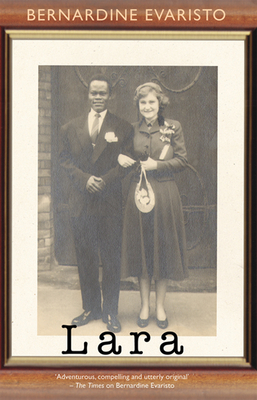 "Lara" is a powerful semi-autobiographical novel-in-verse based on Booker winner Bernardine Evaristo's own childhood and family history. The eponymous Lara is a mixed-race girl raised in Woolwich, a white suburb of London, during the 60s and 70s. Her father, Taiwo, is Nigerian, and her mother, Ellen, is white British. They marry in the 1950s, in spite of fierce opposition from Ellen's family, and quickly produce eight children in ten years. Lara is their fourth child and we follow her journey from restricted childhood to conflicted early adulthood, and then from London to Nigeria to Brazil as she seeks to understand herself and her ancestry. The novel travels back over 150 years, seven generations and three continents of Lara's ancestry. It is the story of Irish Catholics leaving generations of rural hardship behind and ascending to a rigid middle class in England; of German immigrants escaping poverty and seeking to build a new life in 19th century London; and of proud Yorubas enslaved in Brazil, free in colonial Nigeria and hopeful in post-war London. "Lara" explores the lives of those who leave one country in search of a better life elsewhere, but who end up struggling to be accepted even as they lay the foundations for their children and future generations. This is a new edition of Bernardine Evaristo's first novel "Lara", rewritten and expanded by a third since its first publication in 1997.

British-Nigerian writer Bernardine Evaristo is the award-winning author of eight books and numerous other published and produced works that span the genres of novels, poetry, verse fiction, short fiction, essays, literary criticism, and radio and theatre drama. Her latest novel, Girl, Woman, Other (Hamish Hamilton/Penguin, 2019), was joint winner with Margaret Atwood's The Testaments of the 2019 Booker Prize for Fiction. She is Professor of Creative Writing at Brunel University London. Her first verse novel Lara (1997) was republished by Bloodaxe in 2009. She co-edited the Spread the Word new poets anthology Ten (Bloodaxe Books/The Complete Works, 2010) with Daljit Nagra. Her verse novel The Emperor's Babe was adapted into a BBC Radio 4 play in 2013 and her novella Hello Mum was adapted as a BBC Radio 4 play in 2012. In 2015 she wrote and presented a two-part BBC Radio 4 documentary called Fiery Inspiration: Amiri Baraka and the Black Arts Movement. In 2019 she is the inaugural Woolwich Laureate, appointed by the Greenwich & Docklands International Festival.
Loading...
or support indie stores by buying on