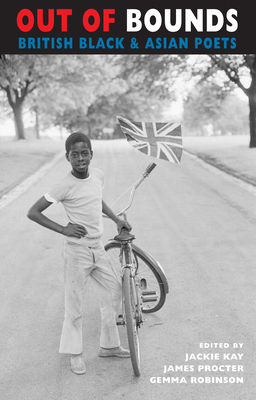 From Aberdeen to the Isle of Wight, Out of Bounds is a newly charted map of Britain as viewed by its black and Asian poets. It takes the reader on a riveting, sensory journey through Scotland, England and Wales, showing the whole country from a fresh perspective. This extensive and ground-breaking anthology - with its sudden forks in the road, and its roads not taken - stops off in the Highlands and Islands, skirts the North East coast from Whitley Bay to the sands of Bridlington, wanders lonely through the Lake District and Yorkshire, climbs the mountains of Wales before descending to the Black Country and Southern England. Along the way it takes in lochs and landmarks from Glasgow's George Square and the Angel of the North to the London Eye and the Long Man of Wilmington. An alternative A to Z of the nation, a new poetic guide, the book enables us to look again at the UK's local and regional landscapes and the poets who pass through them. Out of Bounds is a definitive anthology that brings together new and established black and Asian writers and places them firmly on the map of what is great and not so great about Britain. Includes: Shanta Acharya, John Agard, Patience Agbabi, Moniza Alvi, James Berry, Jean 'Binta' Breeze, Vahni Capildeo, Merle Collins, Fred D'Aguiar, David Dabydeen, Imtiaz Dharker, Bernardine Evaristo, Khadijah Ibrahiim, Linton Kwesi Johnson, Jackie Kay, Tariq Latif, Sheree Mack, Jack Mapanje, E.A. Markham, Daljit Nagra, Grace Nichols, Louisa Adjoa Parker, Michelle Scally-Clarke, Seni Seneviratne, John Siddique, Lemn Sissay, Dorothea Smartt, Wole Soyinka, Derek Walcott, Benjamin Zephaniah, and many others. The book has also inspired an innovative digital project linking poetry, place and identity in the 21st century developed for schools.

Jackie Kay is one of Britain's leading poets and Professor of Creative Writing at Newcastle University. She is one of Britain's best-known poets, appearing frequently on radio and TV programmes on poetry and culture. Her poetry books have all sold thousands of copies, while her fiction (from Picador) has been massively popular. Her other Bloodaxe titles include The Adoption Papers (1991) and Darling: New & Selected Poems (2007). In 2014 she was appointed Chancellor of the University of Salford, and in 2016 she was named as the new Makar, National Poet of Scotland. James Procter is Reader in Modern English and Postcolonial Literature at Newcastle University. Gemma Robinson is Senior Lecturer in English at the University of Stirling. She is the editor of Martin Carter's University of Hunger: Collected Poems & Selected Prose (Bloodaxe Books, 2006).
Loading...
or support indie stores by buying on