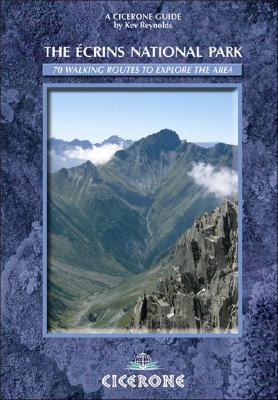 The Ecrins National Park contains some of the most spectacular mountain scenery in the whole European Alpine range. Easily accessible by public transport or car, and with several charming valleys in which to make a base (including the Romanche, Guisane, Vallouise, Valgaudemar and V?n?on valleys), this largest national park in France offers an unrivaled selection of hikes - each one revealing awesome views. Kev Reynolds has picked 70 of the best routes from some of the finest valleys, enough to keep any active walker content for several holidays.Located southeast of Grenoble and unequally split between the d?partements of Isere and Hautes-Alpes, the Parc National des Ecrins is the largest in France, covering an area of 92,000 hectares (227,332 acres), with a peripheral zone nearly twice that size. This is mountain country par excellence, with the highest peaks forming a block at the very heart of the range, and a diverse assortment of valleys surrounding or spreading from it.

Kev Reynolds is a freelance writer, photojournalist and lecturer. A prolific compiler of guidebooks, his first title for Cicerone Press appeared in 1978; he has since produced 27 titles for Cicerone, with others being researched. A member of the Outdoor Writers' Guild, the Alpine Club and Austrian Alpine Club, his passion for mountains and the countryside remains undiminished, and he regularly travels throughout Britain to share that enthusiasm through his lectures.