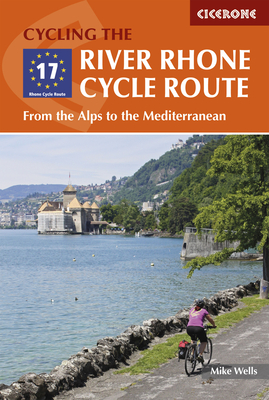 From the Alps to the Mediterranean

Guide to The River Rhone Cycle Route, an 895km bicycle ride starting high in the Alps of central Switzerland and finishing at the Mediterranean Sea, near Marseille. The route - which is mostly downhill - is divided into 20 stages (averaging 45km per stage) and can be completed by most cyclists in 12-14 days. The described route uses two waymarked national cycle trails: the Swiss R1 Rhone Route and the French ViaRhôna, which together have been adopted by the ECF (European Cyclists' Federation) as EuroVélo route EV17.

The guide provides detailed route descriptions and 1:150,000 mapping for each stage, together with plenty of practical advice such as preparing for the journey, transport options there and back, what to take, accommodation en route and more. A Swiss/French glossary is also included.

Taking in dramatic mountain vistas, Lake Geneva's enchanting beauty and the coastal delights of southern France, the route showcases some of the region's most spectacular scenery, making it a veritable gem for any tour cyclist looking to stretch their legs in stunning surrounds. If a visual feast is not enough, cyclists can indulge in the gastronomic wonders of the region. And need we mention the fact that the Rhone flows through some of the greatest wine producing regions of both Switzerland and France?

Mike Wells has been walking long-distance footpaths for 25 years, and a keen cyclist for 20. He has walked the major British paths, the GR5 from Lake Geneva to the Mediterranean, and explored the Dolomites Alta Via routes in Italy. He has also walked in Poland, Slovakia, Slovenia, Norway and Chilean Patagonia. Starting with UK cycling routes, he soon moved on to long-distance routes in the rest of Europe and beyond, including a circumnavigation of Iceland and a ride across Cuba.