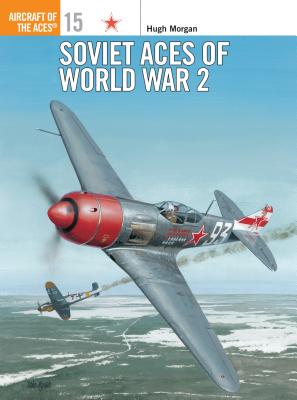 Soviet Aces of World War 2 (Aircraft of the Aces)

No single volume in English has ever appeared in the West dealing with this intriguing subject area, but now that restrictions have relaxed in the former Soviet Union, records of the deeds of the elite pilots of the various Soviet Air Forces are coming to light. Although initially equipped with very poor aircraft, and robbed of effective leadership thanks as much to Stalin's purges in the late 1930s as to the efforts of the Luftwaffe, Soviet fighter pilots soon turned the tables through the use of both lend-lease aircraft like the Hurricane, Spitfire, P-39 and P-40, and home-grown machines like the MiG-3, LaGG-3/5, Lavochkin La-5/7/9 and the Yak-1/3.

Hugh Morgan is the Director of an autistic charity based in the Midlands. He has long been fascinated by the aviation world, and has written several very successful titles for Osprey.
or
Not Currently Available for Direct Purchase