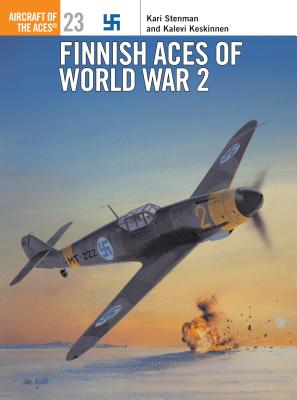 Finnish Aces of World War 2 (Aircraft of the Aces) (Paperback)

Always outnumbered by their Soviet counterparts, the small band of Finnish fighter pilots who defended their Scandinavian homeland from the 'communist hordes' in three separate wars between 1939 and 1945 amassed scores only bettered by the Luftwaffe's Jagdflieger. Initially equipped with a motley collection of biplane and monoplane fighters garnered from sources across the globe, the Finnish Air Force was thrust into combat in November 1939. Given little chance against the massive Soviet force, the Finnish fighter pilots confounded the sceptics and decimated the attacking fighter and bomber formations, prompting the Russians to call a halt in March 1940. This scenario was repeated in 1941, and by 1943 the Finns had become uneasy allies with the Germans. Complete with first-hand accounts and detailed colour illustrations, this book profiles aces like Juutilainen and Wind, who proved unbeatable in the final months of conflict.

Kari Stenman in undoubtedly the most knowledgeable authority on the Finnish Air Force in World War 2, having written over a dozen books on the subject since the late 1960s. He runs his own publishing company in Finland. Kalevi Keskinnen is an expert on Finnish aviation of World War 2. He works full time as an aviation author and lives in Finland.
or
Not Currently Available for Direct Purchase
Copyright © 2020 American Booksellers Association