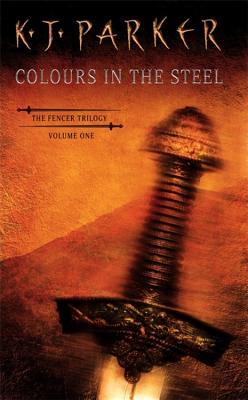 Colours in the Steel

'...one of the most entertaining fantasy debuts in recent years...incredibly vivid, refreshing, fun, thoughtful, absorbing' - SFX

Perimadeia: the famed Triple City and the mercantile capital of the known world. Behind its allegedly impregnable walls, everything is available. Including information which will allow its enemies to plan one of the most remarkable sieges of all time.

The man called upon to defend Perimadeia is Bardas Loredan, a fencer-at-law, weary of his work and of the world. For Loredan is one of the surviving members of Maxen's Pitchfork, the legendary band of soldiers who waged war on the people of the plains for many years, rendering an attack on the city impossible. Until now...

But Loredan has problems of its own. In a city where court cases are settled by lawyers disputing with swords not words, enemies are all too easily made. And by winning one particular case, Loredan has unwittingly become the focus of a misplaced curse from a young woman bent on revenge. The last thing he needs is to be made responsible for saving a city.

The first volume of the acclaimed fantasy series reissued with a stunning new cover style.

Engineer Trilogy
Devices and Desires
Evil for Evil
The Escapement

Saloninus
Blue and Gold
The Devil You Know


Praise For Colours in the Steel…

An intriguing tale of magic, manipulation and revenge...an action-packed adventure.—STARBUST

Assassins, emperors, generals, rogues, farmboys-turned-hero - all the trappings of epic fantasy . . . [and] all the complexity you could ever desire—PORNOKITSCH

From the first page, it has style, humour and pace all its own, and develops rapidly into one of the most entertaining fantasy debuts in recent years...Refreshing, fun, thoughtful, different, absorbing—SFX

....one of the most entertaining fantasy debuts in recent years...incredibly vivid, refreshing, fun, thoughtful, absorbing—SFX

An intriguing tale of magic, manipulation and revenge...an action-packed adventure.—STARBURST

A remarkably accomplished tale for a debut novel.—BLACK TEARS MAGAZINE

Having worked in the journalism and the law, K. J. Parker now writes and makes things out of wood and metal.
Loading...
or support indie stores by buying on
(This book is on backorder)