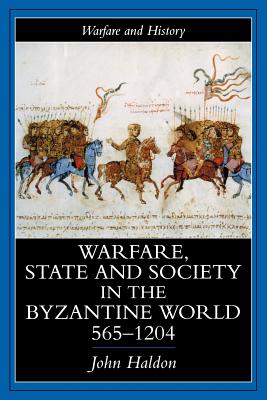 Warfare, State and Society in the Byzantine World 565-1204 (Warfare and History) (Paperback)

Warfare, State and Society in the Byzantine World is the first comprehensive study of warfare and the Byzantine world from the sixth to the twelfth century.
The book examines Byzantine attitudes to warfare, the effects of war on society and culture, and the relations between the soldiers, their leaders and society. The communications, logistics, resources and manpower capabilities of the Byzantine Empire are explored to set warfare in its geographical as well as historical context. In addition to the strategic and tactical evolution of the army, this book analyses the army in campaign and in battle, and its attitudes to violence in the context of the Byzantine Orthodox Church.
The Byzantine Empire has an enduring fascination for all those who study it, and Warfare, State and Society is a colourful study of the central importance of warfare within it.

John Haldon is Professor of History and Director of the Centre for Byzantine, Ottoman and Modern Greek Studies at the University of Birmingham. He is the author of several books, including Byzantium in the 7th Century (Cambridge, 1990) and State, Army and Society (Variorum, 1995).
or support indie stores by buying on
Copyright © 2020 American Booksellers Association