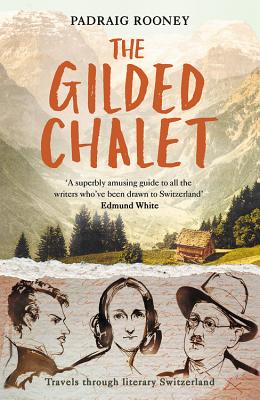 In the summer of 1816 paparazzi trained their telescopes on Byron and the Shelleys across Lake Geneva. Mary Shelley babysat and wrote Frankenstein. Byron dieted and penned The Prisoner of Chillon. His doctor, Polidori, was dreaming up The Vampyre. Together they put Switzerland on the map.

From Rousseau to Nabokov, le CarrÃ© to Conan Doyle, Hemingway to Hesse to Highsmith, Switzerland has always provided a refuge for writers as an escape from world wars, oppression, tuberculosis... or marriage. For Swiss writers from the country was like a gilded prison. The Romantics, the utopians and other spiritual seekers viewed Switzerland as a land of milk and honey, as nature's paradise. In the twentieth century, spying in neutral Switzerland spawned the finest espionage and crime fiction.

Part detective work, part treasure chest, The Gilded Chalet takes you on a grand tour of the birthplace of our best-loved stories, revealing how Switzerland became the landscape of our imagination.

Praise For The Gilded Chalet…

With a sharp eye for detail and a historian's capacious knowledge, Padraig Rooney has written a superbly amusing guide to all the writers who've been drawn to or emerged from Switzerland. This is a book that should be stuffed into every stocking - the perfect Christmas gift!

There is a mastery in his handling of prose-rhythm which I find exciting. It is in order for an ageing writer, in a valediction to Irish readers, to essay a prophecy about Irish letters. Mr. Rooney will be a credit to them.

The Gilded Chalet entertains, informs and whets the appetite for more. And there are more discoveries in Rooney's tasty assortment of literary bonbons.—Portland Book Review

A fascinating account of how Switzerland has always provided something of a refuge for writers - from war, oppression, tuberculosis and even marriage - as well as an inspiration to them too.—The Bookseller

A fascinating look behind the scenery at how Switzerland has influenced and affected some of the greatest authors and some of my favourite books.

A gossipy feel [with a] touch of Clive James in its humour. What has Switzerland ever done for us? Quite a bit.—Irish Mail on Sunday

A lively and entertaining tour of literary Switzerland. Rooney has an eye for a telling anecdote. Informative and full of surprises, not least the portrait of Switzerland as a hotbed of literature and revolution.—The Tablet

An enjoyable wander around literary Switzerland. The Gilded Chalet tracks the snow prints, shattered booze-glasses and missed spy drops of the likes of Rousseau, Byron, Hemingway and le CarrÃ©, sniffing the air of inspiration they found in the hills, huts and bars.—Wanderlust

Constantly engagingâ?¿ and highly entertaining. Rooney is almost casually brilliant on Joyce, Nabokov and Mann, but revelatory on such as Durrenmatt and Frisch. He shows a deftness of touch but can, too, be powerful. A love letter to reading that does not shy away from the sins of reality.—Herald

Rooney's thoroughly absorbing book bundles up all of Switzerland's "gilded ambiguities" into a dazzling package that is part road trip, part reading list, part memoir, and part historical exposÃ©. [It] makes one want to pick up old favourites and seek out new literary discoveries. It is a book for those who love to travel, whether in the mind or on the road. It [is] easy to tear through the volume in a few voracious sittings.—Times Literary Supplement

Padraig Rooney was born in Ireland and studied at Maynooth College and at the Sorbonne. When he was sixteen he first came to Switzerland, saw the Rolling Stones in Berne, and never looked back. He has lived in Switzerland for fifteen years, and teaches English at International School Basel. He worked as a freelance travel writer for many years, for the Irish Times, Irish Press, Sunday Tribune, Bangkok Post, and many Asian magazines.

www.padraigrooney.com
Loading...
or
Not Currently Available for Direct Purchase